Stan is holding a position that has lost 20% of its value in the last week. He can’t believe how wrong things are going. He spent two weeks studying the fundamentals of the company. He monitored the price for an additional month. He was almost positive the price was going to go up at least by 10%, yet it’s down. At this point, Stan is thinking, “What else do I have to lose; I’ve lost so much time and money already, I might as well just stick with it.” Although Stan’s thinking seems reasonable, it’s not rational. Stan has fallen for what behavioural economists call the sunk cost effect:  A person increases one’s commitment to a losing position because a great deal of time, effort, and/or money has been spent. 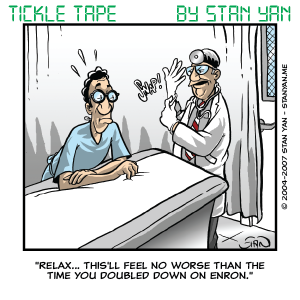 There are many ways to fall for the sunk cost effect. The most obvious way traders are influenced by sunk costs is when they invest a large amount of capital in a trade and the trade doesn’t go as planned. At this point, a trader may feel disappointed and think, “Why did I invest so much money in a losing trade?” The obvious, but the irrational answer to this question is “because I really think it is going to come back.”

It’s hard to admit one is wrong, so the easiest way to deal with the uneasy feeling that you’ve made a mistake is to deny it. One can simply hope that the trade will turn around and the loser will turn into a winner. But as we all know, that’s unlikely to happen. The more logical approach is to just admit one has made a mistake and sell the loser before the loss compounds into an even bigger problem.

There are more subtle ways the sunk cost effect can influence your decisions. For example, when you spend a great deal of energy and time preparing for a trade, you may tend to seek justification for your efforts. Why did you expend such effort if you didn’t think you could make a profit? There is a strong tendency to justify the time and effort you have expended.

This tendency to want to justify your behaviour will gnaw at you, and if you are not aware of it, and are not trying to control it, you will have a tendency to want to make a trade when one isn’t warranted. It’s vital for your survival that you remember that just because you’ve expended time and energy preparing for a trade, it doesn’t mean a high probability opportunity is available. Remember that when it comes to trading, time and energy don’t always pay off. Remind yourself that preparation is necessary, but that the true payoff only happens when you select a true high probability setup.

As you trade, be aware of the powerful influence of the sunk cost effect. Try to consider whether or not sunk costs are influencing your decisions. If you can rationally counteract them, you can prevent them from influencing your ability to trade rationally and profitably.