Traders who are independent-minded see the most profits. It is hard to go it alone at times. There are times when it is difficult to avoid following the crowd. Humans are risk-averse and they feel more comfortable getting confirmation from the crowd rather than going out on their own, and potentially feeling the pain of making a wrong decision. These two mechanisms place humans in a vulnerable position, however. They are prone to emotional and thought contagion. Emotions and thoughts can be contagious. It is vital that you take precautions to avoid catching a bad mood. 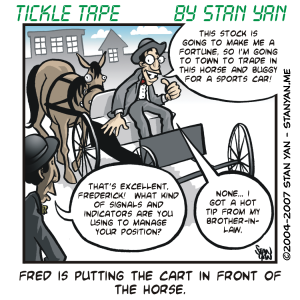 Consensual opinion and moods can be catchy. An analyst may talk up a tech stock, for example, spurring a few traders to buy. Next, a few other traders see the initial phase of buying. They buy in order to go along with the crowd. Soon more traders buy, and so on, and so on… If you are at the start of a buying spree, you can capitalize on the crowd pushing up the price. But usually, a typical trader isn’t aware of the conformist nature of the trend. Rather than getting in at the start of the trend, most enter the market after the trend has initiated and right before a reversal. Their need to follow the crowd and experience the secure feeling of validation from the crowd usually means that they end up selling their positions at a point of weakness in which the majority of market participants are trying to also sell their positions.

In most social environments, it is useful to conform to popular mores. The socially skilled person is able to astutely identify social rules and follow them. This adaptive tendency may not be useful when trading the markets, however. The adaptive tendency to discern what the masses are doing, and the feeling of comfort that comes with following them, can be counterproductive. It is more useful to be a rebel, a person who goes his or her own way and looks inward for what to do.

The winning trader steps back from the crowd and tries to identify the optimal point to buy and sell. This usually requires buying right after a reversal and selling at the start of an uptrend. In other words, one must go against the crowd at times to profit from the behaviour of the masses. This requires putting conformist tendencies aside temporarily and making a gutsy move to go against what the masses are doing.

If you are prone to irrational exuberance and are prone to becoming overly optimistic, you may unrealistically become enthusiastic as you see the masses buy. If left unchecked, you may allow your emotions to match what the masses are doing, rather than look inward in order to identify the most prudent investment decision. Rather than catch the thoughts and moods of the masses, you must anticipate their thoughts and feelings and trade against them rather than with them, which usually means selling when they are buying, waiting for a turning point, and then buying when the masses are selling.