When your hard-earned money is on the line, there’s a strong urge to be extremely careful. After all, if you should make a mistake, you could end up taking a huge loss, or worse yet, you could find yourself in a major drawdown. Novice traders, especially, may be reluctant to put their money on the line until they are absolutely sure that their trading plan is foolproof. It’s tempting to think, “I’ve got to account for every possible factor that may go against my trade, or else I’ll lose money, and that would be a fatal blow. 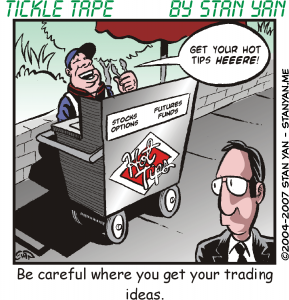 It may be a natural human tendency to be averse to risk, but if you’re not careful, you may be afflicted with a severe form of analysis-paralysis. Analysis paralysis occurs when a trader over analyzes a trading decision to the point that either a decision is not made or a decision is put off so long that a major market move is missed. Although it is often the case that an analysis of all possible alternatives and all possible consequences of one’s decisions is the hallmark of good decision-making, too much analysis can be a distraction.

Why are we consumed with making a mistake? Throughout our lives, we have been taught to make prudent decisions rather than acting on impulse. When making a major life decision, for example, it is useful to consider all alternatives in a logical, impartial, and comprehensive manner.

Great thinkers, such as Benjamin Franklin, advocated evaluating the pros and cons carefully before making a decision. Similarly, contemporary decision researchers suggest that people can avoid making common decision-making biases through evenhanded consideration of all possible alternatives. Research studies have shown, for example, that cultivating a deliberative mindset helps people focus on and consider incoming information and decrease the influence of self-serving decision-making biases.

Winning traders have learned to avoid impulsive decisions. It is vital to have a clearly defined trading plan. Make sure that a single trade doesn’t have the potential to completely wipe out your trading account. In addition, clearly define the signs and signals that indicate that your trading plan has gone awry, suggesting that you should close out the trade to protect your capital. It’s useful to conduct a thorough analysis before making a decision, but it isn’t useful to become completely paralyzed by it.

Research studies suggest that it isn’t always necessary to over analyze a decision. A study by psychologists Dr David Armor and Dr Shelly Taylor suggests that in some cases, it may be wise to just quickly choose an alternative and focus all your energy on achieving an objective. In a well-controlled experiment, participants were randomly assigned to one of two conditions.

In the deliberative condition, participants were asked to decide between two equally effective strategies to obtain a reward, before using one of the strategies to reach an objective. In a second condition, participants were not given a choice, so they would immediately focus all their energy on using a single strategy to achieve the desired goal. There were clear advantages to focusing on a specific strategy, rather than deciding between two options. Participants who did not have to choose, and did not deliberate, showed greater determination, commitment, curiosity, and confidence than those who did. They also viewed the task as less difficult and performed better.

Many trading decisions must be made quickly before market conditions change. Through experience with the markets, the winning trader can analyze information quickly and reach a decision. While trading, it isn’t useful to deliberate too much. It just doesn’t pay off. You may not always be right, and you may have a few losing trades, but that’s the nature of the game.

Through a carefully devised trading plan and risk management, however, you can minimize the impact of a single losing trade, and make enough winning trades to come out ahead. So when you start to see yourself over-analyzing and becoming paralyzed, stop! Just put on the trade already. You’ll trade more profitably in the long run.