Jack has just put on a $1,000 trade, which is 10% of his trading capital. He feels he needs this trade to be a winner. He needs to see a huge jump in his account balance. He’s been trading for a year, and he just can’t wait any longer. He has been working hard and he wants all his heroic efforts to pay off immediately. 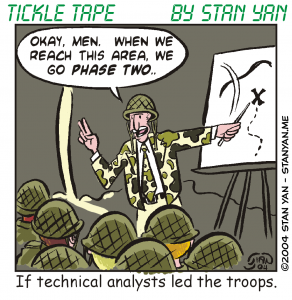 Do you see any problems with Jack’s overall approach to trading? One problem is that he has “put all his eggs in one basket.” He’s put on a big trade, and he merely doesn’t hope it’s a winner; he needs it to be a winner. Such a mindset isn’t ideal. Jack feels extreme pressure to succeed. He feels a sense of urgency; he feels rushed and desperate. In all likelihood, his need to win will interfere with his ability to maintain the calm, focused, and objective mindset that is a key prerequisite to successful trading. It’s vital to stay focused and objective, and that means being able to remain patient, to be able to delay gratification and rewards for later.

A fundamental way to maintain patience is to examine one’s underlying attitudes and beliefs. People who are impatient operate under the “new dimension.” They want rewards now, rather than later. It is imperative that they receive profits and rewards without delay. They think, “It’s either now or never” or “If I can’t get what I want right now, I never will.” There’s a sense of desperation in this way of thinking. There’s a belief that unless one is profitable immediately, it’s disappointing, distressing and frustrating.

Traders may differ on the extent to which they operate under the “new dimension.” Some traders may never fall prey to such beliefs, but many traders operate in terms of the “new dimension” at one time or another. Trading is a challenge. A great deal of effort is expended, and it often seems as if the rewards should be greater and more immediate. For example, it’s not uncommon for a novice trader to devote six months of hard work and see nothing for it. Indeed, after six months, most novice traders end up losing money. It’s at these times that the beliefs and attitudes of the “new dimension” are the most powerful.

You may think, “I’m fed up. When am I going to see big profits? If I don’t see profits immediately, I’m just going to quit.” It’s reasonable to have such thoughts, but such beliefs often make matters even worse. When you believe that you “must” or “need” to be profitable immediately, you feel anger and frustration, and these emotions will distract you from trading. Just as Jack in the example above, you may feel a strong, impulsive need to abandon risk controls and put a large amount of your trading capital on the line for a single trade.

Similar beliefs are, “My hard work must pay off now” or “I can’t wait any longer.” When you notice yourself thinking such statements, refute them. Remind yourself, “I don’t need to make a profitable trade. Trading takes time; I shouldn’t think that I must be profitable immediately, or on this particular trade. It isn’t the end of the world if I lose this trade (and make sure that you managed your risk properly so that should you lose on a single trade, it isn’t a financial disaster).

I can be patient; I’ll reward myself by feeling satisfied that I executed my trading plan properly, and I will wait for the financial rewards to come later.” By refuting beliefs of the “new dimension,” you’ll be able to stay patient, calm, and relaxed. So don’t let impatience, which leads to frustration and anger, get the better of you. Stay calm. Remember, “Trading profitably takes time.” You may not receive profits immediately, but if you build up your skills, gain valuable trading experience, and keep at it, you’ll eventually be a consistently profitable trader.