People have a natural affinity to follow others. It can be very adaptive at times. If you see someone slip on an icy sidewalk, for example, it would be wise of you to start walking slowly and carefully to protect yourself from getting hurt. People are so attuned to others that they mimic their behaviours without knowing it. Psychologists call this phenomenon contagious behaviour. Contagious behaviour is the unconscious transmission of actions or emotions from one person to another. When trading the markets, we often fall prey to contagious behaviour when we react to the opinion of the masses. 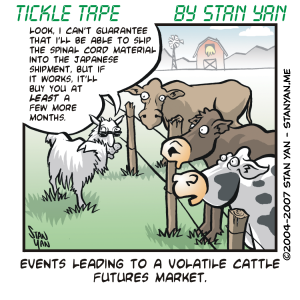 There are both social and biological bases for contagious behaviour. It’s a pervasive phenomenon. From a social standpoint, researchers have shown that people react automatically to well-learned scripts. When we see a set of behaviours happen over and over, we react to this pattern without thinking. Consider a common example while trading the markets: An analyst talks up a stock spurring a few online traders to buy. Next, a few other traders see the initial buying spree and decide to follow. Soon many people are following the crowd. Research has shown that people can follow the crowd without knowing it.

Negative emotions, such as fear and panic, are especially contagious. When people are studied in groups in a laboratory setting, they tend to “catch” unpleasant emotions from others more than pleasant emotions. When you see the masses sell, for example, you are naturally bound to become afraid yourself and start selling. Your natural human affinity to follow others can work against you, though. You may sell on irrational, unconscious gut instinct, even when it is not in your best interests.

There are also biological reasons that we follow each other. Humans are built to follow others. Research studies have shown that neurons in the brain fire merely by watching someone perform an action. We laugh when others laugh, and we run from a threat when we see others reacting in a panic. Humans are biological, social beings and these social and biological bases of contagious behaviour may it difficult to beat at times.

Contagious behaviour may be difficult to fight, but it is vital to find a way to break away from the crowd. Winning traders often need to go their own way. It is often useful to be a rebel, when necessary. The winning trader steps back from the crowd and tries to identify the optimal point to buy and sell. It is necessary to build up immunity to contagious market behaviour. How can you do it? First, anticipate the strong tendency to follow the crowd. If you are aware of the powerful influence of the crowd, you can go against them when you need to.

Second, know your personality. Some people are more prone to “catch” contagious behaviour than others. Emotions are especially catchy. If you are easily discouraged, you may be prone to catch other people’s panic and fear. Third, try not to pay attention to the crowd. Obviously, you can’t follow the crowd if you are oblivious to what they are doing. If you make a conscious attempt to try to look at circumstances from an objective, third eye, you can remove yourself from the situation and react more independently.

It may be difficult to build up immunity to contagious market behaviour, but if you increase your awareness of the potential problem, you learn to look inward and go your own way. The more you can think independently, the more you will be inoculated from the contagious opinions and emotions of the crowd.