The number of psychological theories to explain human behaviour seems endless. It’s as if every psychologist wants to propose his or her own theory, and convince the rest of the psychological community that it offers a new perspective. A few psychologists have extended psychological theory to the study of the markets, and have presented their theories in investment psychology books. But in a rare example, Dr Karl E. Scheibe, a psychology professor at Wesleyan University, has done the opposite; he uses investor behaviour in the stock market to support a general theory he has proposed about human motives.

In his book “The Drama of Everyday Life,” Dr Scheibe argues that everyday life is replete with numerous dramas that are played out over and over. As humans, we seek out drama. “Drama relieves human beings from the boredom and sameness of repetition,” according to Dr Scheibe. Throughout his book, Dr Scheibe describes several examples where people in their everyday lives seek out the drama as an antidote to boredom. In a chapter entitled, “Fear and Greed,” he discusses how people find drama in the stock market. 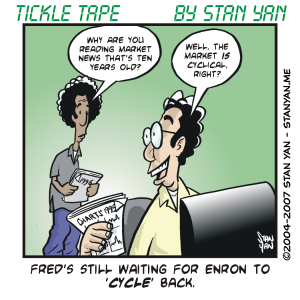 As you’ve probably heard countless times by now, market behaviour is motivated by fear and greed. Dr Schiebe tries to expand this position. He notes an asymmetry between fear and greed: a loss is more fearsome than again is pleasing. Tversky and Kahneman’s studies on risk aversion provide the best scientific illustration of this principle. For example, when asked to make a choice, people accept a sure profit of $100 over a 50% chance of winning $200. People don’t like risk and will always take the sure profit.

The consequence of risk aversion for investor behaviour is that, in general, people’s losses exceed their gains. That is, most people will be primarily motivated to avoid the unpleasant feelings of a possible loss, and thus, liquidate their positions prematurely. And because of their insatiable greed, they will keep reinvesting in the markets. This cycle of selling prematurely and reentering the markets means that most investors will lose overall rather than profit.

So why do most investors continue to invest in the markets when they will continue to lose? It isn’t merely greed since the greed motive is less powerful than the motive to avoid risk. If it isn’t greed, then what is it? They need drama. To fight off tedium and boredom, they invest. They create a dramatic interplay. They become excited about winning but get scared about losing, and sell to protect what they have left. But then boredom sets in again. The desire to make big profits excites them, and they enter the markets again. And so the drama repeats over and over.

Dr Schiebe notes that the search for drama is not restricted to amateur investors, but extends to professional money managers as well. All professional money managers are aware that the vast majority does not outperform the indexes. They would be better off purchasing a representative set of securities and just leaving it alone for a year. They could go fishing, relax by the beach, or climb a mountain, do anything but touch the investments.

By doing so, their funds would at least match the annual growth of the index, which is better than what most fund managers achieve. So why don’t they do so? It’s the need for the drama. It’s not very exciting to leave the investments alone. They sought out exciting professions as fund managers, and so they continue to go to work every day, try to beat the index, and add more drama to their lives, even though the majority would do better to just leave the funds alone.

Dr Schiebe’s psychological analysis of stock trading may not provide very many new insights, but it is interesting, nevertheless. Behavioural economists and seasoned traders have long noted that market trends are a function of the fear and greed of the masses. But why people are drawn to the markets in the first place is a matter of debate. Dr Schiebe’s explanation that people invest so as to satisfy a motive to seek out drama and ease boredom is a reasonable explanation.

What does this psychological account offer to the professional trader? It’s useful to understand the motives of the masses and see how irrational they are behaving. By seeking out thrills and excitement, they will buy stocks but sell them prematurely for a loss, out of panic. As a trader, you can be right there, ready to take their money. While they buy and sell stocks to add drama to their lives, the professional trader can anticipate how they act on their fear and greed and make money from their predictable moves. But on the other hand, it’s vital to acknowledge one’s own powerful need for drama and excitement.

A professional trader is just as human as an amateur trader, and thus, has a need for drama and excitement in everyday life. Everyone needs drama and excitement, but it is vital to keep these needs out of your trading life. Trading can often be tedious, repetitious, and boring. One must systematically execute a trading strategy consistently, over and over. It’s a mistake to fall prey to the need to seek out drama. The solution? Make sure you get your drama and excitement in a different arena, outside of trading. If you satisfy this need somewhere else, you can deal with the relatively boring and repetitious nature of methodically trading your plan.

The markets are exciting and offer drama, but make sure that you stay professional, and don’t let the drama of the market undermine your trading plan.