Novice traders often report that they have difficulty sticking with their trading plan. There are many possible reasons. A common issue is not having a clearly defined plan. When a trading plan is not clearly defined, it is hard to follow and easy to abandon. When you trade by the seat of your pants, even just a little bit, you can panic at the wrong moment.

You may be prone to over-thinking your plan or you may become easily consumed with self-doubt. When you clearly define a plan, in contrast, you can implement it more automatically. You can enter and exit more effortlessly. Many novice traders say, however, that even when they painstakingly delineate a trading plan, they still have difficulty following it. Depending on your personality, you may or may not have difficulty maintaining control and discipline. 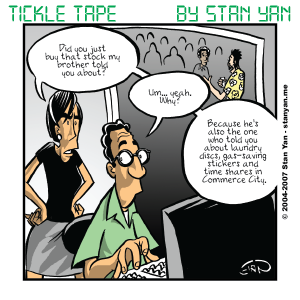 People who are controlled and disciplined in everyday life, ironically, tend to have trouble sticking with trading plans. Disciplined people are rule followers, and research studies have shown that rule-followers prefer certainty. However, anyone who has traded the markets for a few months soon realizes that the markets are not certain, and conventional wisdom is not consistently valid.

It is only true when it is, and the rest of the time it is wrong. As it turns out, people who are more impulsive in everyday life have less difficulty following a trading plan. They view trading as a “game” and they enjoy risk. These kinds of people truly don’t care what happens. They have a natural, carefree attitude when it comes to trading. In a sense, they just don’t care. They can easily think, “Why not follow a plan? It doesn’t matter if it goes awry.” This kind of thinking is useful for a trader.

Most traders, however, have trouble approaching trading with a carefree attitude. For example, they may see the price rise initially. But then it stalls before reaching the predefined exit point. They instinctively think, “How much longer can it go up? There aren’t enough buyers. I can’t wait. I’ve got to sell and lock in my profits right now.” When they get to that point, they start thinking, “Don’t be greedy.

How can it be a bad thing to get out early and get a profit?” At that point, it’s hard to stay in the trade. But it is vital for economic success to stick with the plan. It is a matter of simple mathematics. Although there may be several profitable trade setups out there, finding one is relatively rare. You’ll see many more setups that don’t pan out than actually do. When you hit upon one, you must capitalize on it, and maximize your profits, getting as much out of the trade as possible. Otherwise, over the long run, your winners won’t balance out your losers.

If you are a natural-born risk taker, sticking with your plan is less difficult. Risk-takers get a rush from the trade and can’t wait to see what happens. The psychological rush is more enjoyable, in some ways than the outcome. Most people, however, are naturally worried about the outcome of their trades and a little cautious voice nags them to get out of a trade before it comes to fruition. How do you quiet the voice of caution? It’s hard. Some traders have suggested trading while tired or dazed, so that only a fixed amount of energy is left to both foci on the cautious voice and trading, so in the end, you just automatically trade the plan.

The idea is to lower one’s inhibitions so that that he or she just follows the plan without thinking. It’s the right idea, but it is hard to implement. Some people may be able to trade while tired and dazed, but it is more likely that such a strategy will produce impulsive decisions in most people. It is probably wiser to be rested so that you can concentrate and quiet the little voice that nags you to get out of a trade.

Perhaps the best thing you can do is to manage risk. If the outcome of the trade truly doesn’t matter, then you won’t worry as much and can stick with your trading plan. Once you are rested, can concentrate, and you have relatively little to lose, you can try to cultivate the proper mindset of the winning trader. Winning traders view trading as a game, much like how a person plays a videogame. They think, “I’m just trading for fun.” They look at a trade and think, “I want to see if it reaches the exit point or not.