You’ve been watching a stock for three hours and you tell yourself, “It seems to match perfectly to the first two waves of an Eliot Wave pattern.  I’ve seen this before and I’ve made big profits every time.  It’s so close that it’s got to be a match.  I’m getting in.  I think I’m right.  How can I be wrong?  I’m positive that I’ve got this one pinned down.”  Sometimes it’s hard to know if you are right or wrong when it comes to a trading decision.

Are you overconfident?  Are you not confident enough?  Overconfidence is one of the biggest psychological issues for traders and depending on the school of thought, psychologists differ as to the explanations of overconfidence.  We recently discussed how over-confidence is a result of a “big ego.”  Today we look at overconfidence from the perspective of a behaviourist. 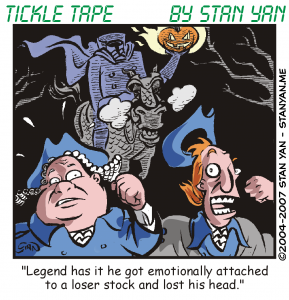 Overconfidence may consist of a set of thoughts, feelings and emotions, but that is irrelevant from the vantage-point of a radical behaviourist.  All that matters is how behaviours are rewarded or “reinforced.”  Overconfident traders are usually those traders who had a lot of wins in their early trades.  Because past trading behaviour, regardless of skill level, was rewarded, it persists, even under circumstances of low reward.

Psychologist B. F. Skinner introduced the idea that our current behaviour is the result of past “reinforcement contingencies.”  Skinner studied laboratory animals, such as rats and pigeons, to determine how rewards can “shape” behaviour.  For example, when a laboratory animal is given a food pellet every time it presses a lever, the rate of lever pressing is high.

Translated in terms of trading, when a trading strategy produces a profit, it is likely to be repeated.  Albert Bandura refined Skinner’s theory by noting that humans tend to “encode” and remember past reward contingencies.  They develop expectations of reward and use these expectations to decide whether to repeat a behaviour or not.  Thus, it may not matter what the actual reward contingencies were that originally influenced a trading behaviour, but the expectation of reward in the future.

Overconfidence is the expectation that trading behaviours will be positively rewarded.  Skinner found that a “partial reinforcement” reward schedule produces behaviour that is hard to change.  When the laboratory animal is reinforced for every third lever press, for example, the animal persists, even when the behaviour is no longer rewarded.

A slot machine works on a similar principle.  Jackpots are awarded sporadically, so people are not sure when they will be rewarded and when they will not.  When it comes to trading, trading methods that sporadically produced a profit are more likely to be used.  The most overconfident people are those individuals who are inconsistently rewarded.  Their trading strategies are rewarded sporadically, so they never know exactly when the strategy will produce a profit and when it will not.  They continue to use these strategies, even though they are unlikely to produce rewards.

It’s useful to be aware of the various explanations for overconfidence.  Each explanation has a grain of truth to it, and it’s useful to decide how your overconfidence may be explained by it.  From the behaviourist perspective, overconfidence is a matter of believing that you will receive rewards, just because you have received them in the past.  But you may not receive rewards.  Your trading methods may no longer work.  It’s always worth questioning why you expect to receive a reward or make a profit.