At first, if you don’t succeed, try, try again. And when you fall off a horse, it’s wise to get back on. Are these sayings appropriate for trading? In some ways they are, but in some ways, they aren’t. Long ago psychologists mapped out something called the inverted U theory of stress and performance. The impact of stress depends on the difficulty of the task you are trying to perform. If a task is relatively easy, a little bit of stressful arousal can enhance performance. But if the task is difficult, even a little bit of stressful arousal can impede performance. When a task is difficult, the additional feeling of stress can lead to frustration, anger, or despair. Trading is hard. 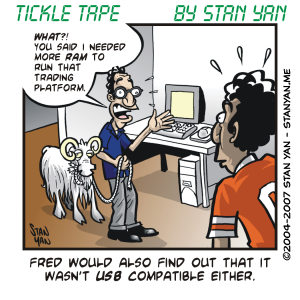 It requires mental energy. When you first start out trading, you must concentrate and focus on what you’re doing. It’s a lot like learning to drive for the first time. When you first start out, you need all the psychological energy you can summon. With enough practice, however, you can drive almost without thinking. When a task is easy, it’s wise to keep at it. You aren’t tired, worn out, and if you keep at it, you’ll eventually learn what to do and succeed. For many novice traders, however, the analogy doesn’t hold. Trading isn’t simply a matter of continuing to try harder when you are beaten. Trading is a psychological endeavor that requires analyzing complex information, honing your intuition, and putting your money and ego on the line. When you feel beaten by the markets, it is often wise to stand aside for a little while and return when you are rested, relaxed and ready for action.

People differ in terms of their mental stamina. Some people can take loss after loss and it doesn’t faze them. Perhaps they have a lot of trading capital, or maybe they are used to failure and rejection, like a salesperson who makes 100 cold calls to get just one big sale. Everyone has his or her own psychological makeup. It’s useful to know what yours is and work with it. Some novices get bogged down working under the false assumption, “Real traders trade all day, every day. They keep going, no matter what.” That kind of macho attitude can get you into trouble, though.

A common occurrence among novice traders, and even a few seasoned traders, is setting high standards for themselves to achieve, and feeling beat when they fail to meet their expectations. Suddenly, they are disappointed, stressed out, and prone to make trading errors. Losses start to mount, and their mood worsens. Soon, they find themselves in a deep psychological hole of despair. They are ready to give up. In many ways, it’s like having a big psychological drawdown. You can’t just snap out of it. It will take a lot of extra effort and psychological energy to get back up to par. But had the problem been identified early, specific steps could have been taken to prevent a transitory bad day from becoming a major career turning point.

Seasoned traders monitor their moods, and when they start feeling tired, worn out, and ready to give up, they stand aside. They acknowledge that trading the markets can be stressful, and they take care of themselves. Everyone’s threshold is different. Some people can take a lot of stress; other people need to take breaks more frequently. But whatever your tolerance level, it is vital that you learn to identify it, and take a break when you reach it. You could just jump back on the horse and get ready to ride. If you do, though, you may do more harm than good.

If you want to trade the markets skillfully, you must be ready to face endless setbacks. But you don’t need to let these setbacks get the better of you. How you get back up is more important than how many times you get knocked down. If you pretend you are invincible when you aren’t, you will make things worse. But if you take a break, relax, and rebuild your psychological resources, you’ll be ready to ride like a champion when you do get back on the horse.