Humans are risk-averse. We don’t like losses, and we’ll do almost anything to avoid taking them. Losses are painful, and there’s a strong need to seek out pleasure and avoid pain. It is easier to avoid admitting a loss, and traders tend to come up with many ways of denying one has a loss, such as holding on to a losing trade and hoping it will turn around or keeping losses on paper to avoid acknowledging them. 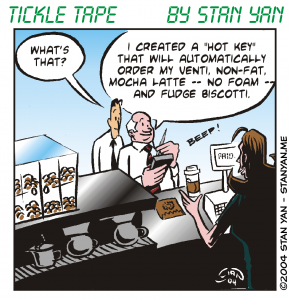 But in the end, you will trade more efficiently and profitably if you can take losses as quickly as possible, move on and make a new trade. For example, in his book, “The Disciplined Trader,” Mark Douglas suggests that you close out losing trades immediately, the instant you perceive that trade is a loser. The best way to do this is to have a clearly defined trading plan where you predefine where you will enter and exit a trade. Once you have a clearly defined plan, you can execute the trade without hesitation. There is nothing to consider, weigh, or judge and consequently nothing to tempt you to hesitate and be consumed with self-doubt. You’ll be able to focus on monitoring the trade, and if you can follow your plan, you will be able to trade effortlessly.

The best way to take a loss is to anticipate it. Don’t be caught off guard. If you go into a trade expecting that it may be a loser, you won’t be as bothered should the trade go against your expectations. If, on the other hand, you try to avoid considering the possibility, you’ll become extremely frustrated when you are in the midst of a losing trade. It is much more useful to accept the fact that losses are the norm rather than the exception.

It is also vital to define your potential losses before you enter any trade. Define your possible loss, or risk, in comparison to your possible reward, or profit. It is also vital that you don’t take losing personally. Traders who put their self-esteem on the line with their money are especially vulnerable to strong, unpleasant emotions when they lose. But if you take a more carefree approach, and think, “It is not personal; it isn’t a big deal in the end,” then you will be able to accept a loss and take quick, decisive action.

Taking a loss is a fact of trading. If you trade to make profits, you will face many more losing trades than winners. But just because you lose more than you win, doesn’t mean that you won’t trade profitably over the long run. The fact that you lose trades is not an issue. The issue is how you cope with losses. If you view them as nothing more than a minor setback, you’ll get back up and make trade after trade in order to come out of it. But if you are stunned and disappointed, you’ll actually give the losing trade more significance than is warranted. And in the end, you may end up losing money over the long run. So practice taking losses effortlessly. You’ll trade more profitably in the long run.