Jack has an optimistic attitude. He seems fearless. When asked why he is so optimistic, he says, “I have nothing to lose. I’ve acknowledged the risks upfront, accepted them, and now, I can trade with confidence knowing that I can survive the worst-case scenario.” Jack is a realistic optimist. He isn’t looking at the world through rose-coloured glasses. Instead, he acknowledges that he can lose a great deal of trading capital should his methods stop working, and he is ready to deal with the possibility. In a way, he thinks negatively at first, mapping out all the adverse possibilities, and taking preventative steps to minimize their influence. Once he has faced all the possible drawbacks and taken all necessary precautions, he is ready to cultivate a positive attitude and trade with confidence. 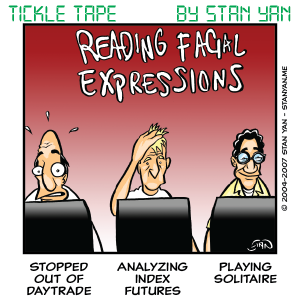 Many novice traders make the mistake of building overly optimistic false confidence. Rather than admit their limitations, they try to cover them up. They pretend that they have trading skills that they have not yet honed. They live by the motto, “What you can’t see can’t hurt you.” When it comes to trading, however, it isn’t useful to hide. It’s vital to face the facts, as dire as they may be, develop a game plan to address them, and move on.

Perhaps one of the greatest producers of stress is the feeling that one must meet unrealistic expectations. Whether it is at the forefront or merely in the back of our minds, the need to meet an unrealistic goal gnaws at us. We don’t feel at ease because we know that we must meet a goal that is either too difficult or impossible. This circumstance is especially true of trading. For example, many novice traders want to turn a $5000 account into a large return but this is unlikely. Others may believe that they can trade in their spare time and develop proficient skills to trade like a master trader. Such aspirations are merely pipedreams. And trying to achieve them is going to cause stress, since they are unlikely, and seasoned traders would say, impossible. Pretending it is possible, however, can strangle your energy and creativity.

It takes more energy to maintain the illusion than merely admit the possibility that such aspirations are unlikely, develop a new and realistic game plan and move on. A similar issue for the more advanced trader is not admitting that one may face losses at some time or another. Losses are inevitable and one should take precautions, such as firm risk controls, to prevent the possibility of having detrimental effects. By pretending that such an adverse or “unacceptable” event is unlikely, however, one is putting more emphasis on denying the existence of a possibility than just accepting it and finding a simple remedy.

Don’t waste your limited psychological energy on hiding from the truth. Regardless of your level of expertise, trading has its drawbacks. And you would be better off admitting them and taking precautions to prevent them from getting the better of you. Once you face the worst-case scenario and take precautions against it, you’ll feel relieved. You’ll feel free and creative, and increase your ability to trade with a peak performance mindset.