A common problem among traders and investors is the tendency to sell profitable trades prematurely and hold losing trades unnecessarily.  Once we have held a losing trade for a long time, we have a strong need to justify our actions. This need for justification is so powerful that we often change our opinions because of it.  We start to believe that the losing trade will turn around, rather than admit we have spent money and psychological effort for no good reason. This is called the insufficient justification effect. 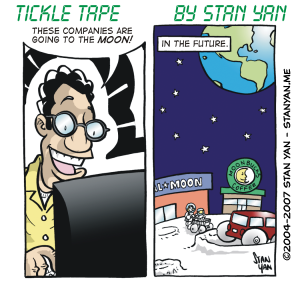 Half of the participants were given $1 for making the sales pitch while half were given $200.  After delivering the sales pitch, all participants were again asked to rate how interesting they thought the task was. People given $200 didn’t change their minds. They still thought the task was boring.  People given $1, in contrast, changed their minds; they thought the task was more interesting than they had previously thought. This finding shows the insufficient justification effect. People have a strong need to maintain consistency between their beliefs and actions.  When there is a discrepancy, or cognitive dissonance, something must change for consonance to be restored. In this case, since participants had already made the sales pitch, they couldn’t change their inconsistent actions, they had to change their opinions.

They thought, “I did the sales pitch in which I argued that a very boring task was interesting for only $1.  Why did I do that? That doesn’t make sense. I guess the task was not as boring as I had thought.” People are motivated to align their beliefs and actions. Participants who were paid $200 didn’t have to justify their inconsistent actions. They argued that the boring task was interesting because they were paid sufficiently to do so.

The psychological processes of logical consistency and dissonance reduction influence trading decisions as well.  If one holds a losing trade for a long time, for example, one may think, “I have held this trade for a long time yet it is losing money.  Why am I doing that? Why have I expended so much money and psychological energy? I must truly believe it is going to turn around.” There is a strong need to justify our actions.  It’s especially difficult when we put our self-esteem on the line, such as when we also think, “If I admit I’m wrong, I’m a bad trader. I have to hold on to this trade.”

To maintain logical consistency and reduce cognitive dissonance, you must hold on to the losing trade.  One way to combat this tendency is to accept a set of beliefs that will allow you to sell your position, “A good trader cuts losses and I’m a good trader.” “Many times my trading strategy will fail and I must cut my losses before I make them worse.” It’s also useful to realize that it is difficult to take action in the midst of a losing trade.  Some trading coaches suggest having a clearly defined exit strategy such as a stop-loss point.