Is there anyone who does not feel at least a twinge of nervousness when he or she initiates a trade? It’s quite natural to feel butterflies when one’s bid or offer is hit – even for someone who has traded successfully a thousand times. Similarly, the pianist who has practised a Chopin scherzo for weeks might feel nervous in the moments before a recital. Experience teaches us that one can never be so polished or practised as to completely avoid feeling some amount of anxiety. 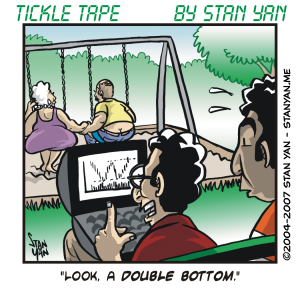 Accepting one’s own fallibility is a crucial step for mastering the inner game of trading, and if you have a problem with anxiety, it’s vital that you identify this issue and take steps to work around it.  Some novice traders are so paralyzed by their extreme anxiety that they have trouble even putting on a trade. One way many traders attempt to avoid feelings of anxiety entirely is by employing a mechanical trading system.  Allowing the system to make some decisions for you will alleviate some of the pain anxiety brings. You can get a feel for trading: when to enter, when to exit, how often a trade produces a profit. This experience may take some of the mystery out of trading and allow you to control your anxiety.

Alas, no system will completely free one from the nervous uncertainty of not knowing how a trade will turn out. And even if such a system did exist, over time it would affect the tempo of the marketplace just enough to critically impair the system’s usefulness. Consider an S&P trading system that can generate a closing-bell “buy” signal. If you were to act on this signal every time it occurred, it would eventually create a pattern of buying that would be detectable by someone else’s trading system.

That person would start to anticipate your buy order, buying just ahead of you. And yet another system trader might learn how to jump in ahead of you both. This is not to put the knock on trading systems in general.  Many of them actually do work, and if you have a problem controlling your emotions, using a mechanical system will allow you to trade. But keep in mind that no system works so well that one can sit back and relax while the trading profits roll in, month after month, year after year.

No mechanical system is foolproof, and if it were, the creators probably would not want to release it to the public. (If you do choose a mechanical system based on strong historical results, make sure you follow it long enough to “replicate” prior results; don’t abandon it prematurely.) A mechanical system, however, does allow the extremely nervous person to develop a feel for trading. So if you’re a novice trader who has problems controlling anxiety, try using a mechanical trading system for a little while.  It may help get you on the right path to mastering the markets.