The market seems to be going down. Is it time to think about gloom and doom? Perhaps. At least some market analysts seem to think that the masses have lost confidence in the economy, and these perceptions contribute to the bleak outlook many traders hold of the future. High-interest rates have made many think of running. Many are ready to duck and cover. If the economy is ready for a downturn, it may be time to start thinking like a contrarian. 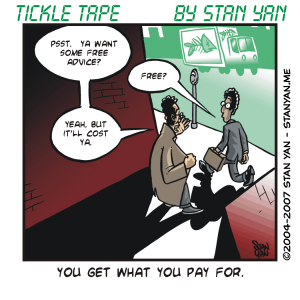 There’s no right or wrong way to trade. Some traders prefer safety. They prefer to trade only during a solid bull market where everyone is enthusiastic and the indexes go nowhere but up. But the markets don’t always go up, and there are times when you have to think creatively and go your own way. To trade like a winner, you must think outside the box, guessing what the crowd will do next, and anticipating how the movement of the masses can benefit you. The astute trader knows when to follow the crowd and when to go against it.

The crowd is usually right until the market trend turns. Some analysts are saying that we are in a turning point right now. It may be that an overvalued market is correcting or it may be that the economy is going to head south. Whatever it is, many are planning for a crash, maybe not a big crash but a little one at least.

The challenge is deciding if we are in a turning point and if we are, developing a trading plan to capitalize on it. How do you do that? A contrarian thinks creatively. For example, during the Great Depression, radio became a big hit. People didn’t have money to go out on the town, so they stayed home and enjoyed “free” entertainment on the radio. If you are a creative trader, you must anticipate which stocks will go up as a result of an economic downturn. Obviously, in 2006 the radio isn’t going to be the hot, new industry that suddenly makes the big profits that bolster stock prices. But there will be some new industry that is going to be the next big thing. If you think outside the box, you can identify sectors that will move upward in the future.

This all sounds great in theory, but in practice, it is difficult to anticipate which stocks will move upward in the future. How can one predict the future without a crystal ball? It is almost impossible. All you can do is to make an educated guess, but at the same time, be ready to admit that you may be wrong. Whatever you decide, however, you must temporarily have full confidence in your method, put money on the line, and act decisively. Sometimes thinking independently is lonesome and scary, but in order to be on the winning side, you have no other choice but to go your own way. So think optimistically. Do not run away like most people. Give it your best shot and think of ways to make a profit while the masses are fearfully and hopelessly getting ready for a crash.