Jack suddenly slammed his mouse against the wall. He was angry. He had been monitoring a trade, ready to take a quick profit, when other traders’ actions impacted the price and unexpectedly thwarted his plans. He calmed down in about 10 minutes. His officemate then asked, “Aren’t you tired of breaking four mice a month just because a few trades don’t go your way?” Jack replied, “What’s the big deal. I like to let out my anger and I feel better.” 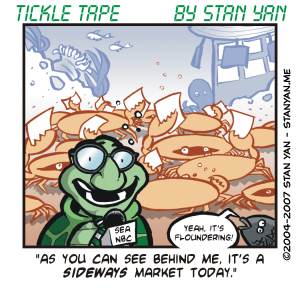 Jack could use a few lessons in emotion control. Although winning traders can often show extreme frustration and emotion, the ideal trader acts in a calm and objective manner. That said, many people misunderstand what good emotion control is all about. They think they should try to suppress their emotions. They try to bottle up their emotions and avoid expressing them.

This isn’t emotion control and it isn’t healthy. Research studies have shown that when people try to suppress their unpleasant emotions, such as anger or frustration, it is ineffective. They may remain physically aroused and agitated, and their emotions may stay pent up. So in a sense, it’s better to throw something against the wall. At least the emotion is expressed. However, such expressions are not entirely effective either, and they put one at risk for further emotional outbursts.

Emotions are the result of events and the interpretation of events. When things don’t go our way, we typically feel anger and frustration. We feel angry, for example, because we believe that events should, and must, go our way and when they don’t, it contradicts our expectations. If you hold the expectation that events should go your way, you are bound to feel frequent, intense frustration and anger. You’ll be destined at best to throw mice and keyboards against the wall and at worst, hold your anger in until you have ulcers or other health problems.

Emotional control is an active rather than a passive process. Rather than just allow your emotions to happen, you must actively look at the events that are precursors to emotions and the “self-talk” that often coincides with them. For example, Jack became angry because he assumed that other market participants should not engage in activities that interfere with his goal of making a winning trade. It’s natural to desire such a circumstance, but it isn’t realistic. Other market participants aren’t aware or don’t care about the existence of other traders and it doesn’t make sense to expect them to.

The consequence of holding such a belief is that you’ll feel frustrated and angry. A simple alternative is to expect that it is quite likely that some mishap will occur that will interfere with your plans. A variety of events can spoil your efforts, from a poor fill to a computer glitch to changes in market conditions. If you cannot philosophically accept that you’re likely to face setbacks, you’ll be at risk for feelings of anger and frustration. Over time it will wear you out. It’s better to think optimistically: There will be setbacks but that doesn’t mean that all is lost. Over the long haul, any setback can be overcome.

Things don’t always go our way and we just have to accept it. If you actively rehearse such statements over and over, you’ll be able to handle a setback when you face it. You won’t be as upset and you’ll more easily pick yourself up, and try again. Persistence is necessary for trading survival, and the less frustration and anger you feel, the more easily you can persist against seemingly endless obstacles. Soon you’ll be on your way to trading profitably and consistently.