Jake thought that he had it all figured out. He would buy 500 shares of a stock when the price hit 50 and sell when it reached 51. Maybe it wasn’t the most thorough trading plan but it was a plan. When Jake tried to execute the plan, however, the trouble started. The stock opened at 51. Jack waited for it to go down to 50, which it did around noon. He tried to buy it as he had planned, but he got a poor fill. He decided to go with what he had, but the stock price went up and down, between 49 and 50 until the close. Throughout the day, Jake felt frustrated. He couldn’t think straight. He hadn’t anticipated how the price might fluctuate as it did. He was caught off guard and thrown into a state of anxiety and panic. 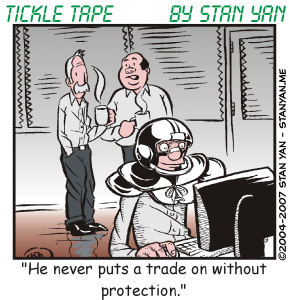 If you’re a trader, it’s vital for your success to stay calm and rational, but it’s hard to do when things aren’t going as you had planned. Chances are that the trading arena isn’t the only place where you have experienced frustration. When things don’t go your way, it’s easy to feel frustrated and disoriented. Have you ever made a wrong turn in an unfamiliar part of town? Perhaps you were late for a doctor’s appointment and you didn’t want to get lost. Suddenly, you couldn’t think straight. You made another wrong turn and ended up even farther away than you had planned. Our brains are wired for primitive responses, and this faulty wiring can throw us off balance at times.

It’s as if we are wild animals: things don’t go our way, our thinking gets cloudy, and we instinctively want to take physical action, such as fighting an opponent or running away. But in modern life, the opponent isn’t always another person. Or the person that you want to get angry at isn’t around. For example, the civil engineer who designed the confusing off-ramp and signage isn’t nearby for you to yell at. It’s the same with trading. You can get thrown out of whack when things don’t go your way, but you can’t fight the markets and make them do what you want to do. You merely have to accept your fate and move on.

What is the best thing to do when you make a wrong turn and end up in the middle of nowhere? Most of us don’t do it, but the smart thing is to pull out a map and make a new plan for reaching your destination. If you are really frustrated, though, even reading a map is hard to do. You may have to calm down before you can actually think clearly and plot a new course.

Similarly, you may get frustrated when trading a poorly devised trading plan, especially when something unexpected catches you off guard. You can suddenly feel dazed and confused. It may be hard for you to calm down. Just like getting lost in an unknown part of the city, you may feel lost when a trading plan goes awry. How can you avoid feeling panicked? Planning ahead helps. Don’t trade a vague trading plan. Consider all possible adverse events, and consider how the price may move in ways that you had not anticipated. Specify the signals that will tell you that you should abandon your plan.

Outline the plan in as much detail as possible, when you will enter, when you will exit, and indicators you will look at to determine how well the markets are behaving according to plan. Novice traders often make the mistake of trading a plan that is unclear and hard to follow. When things get rough, they panic, feel frustrated and don’t know what to do. But if a plan is well formulated, then it’s easy to follow, even in times of extreme uncertainty and stress. Don’t get thrown into a panic when market conditions don’t go your way. Make a detailed trading plan. The extra work upfront will pay off in the long run.