Jim is a novice trader who has had three straight losses. He thinks, “I’m such a failure. I can’t stand losing. I’m disappointed. I just don’t want to think about it. I think I’ll go out for a beer.” All traders, especially novice traders, face losses. Losses, and other setbacks, aren’t a problem. It’s how you recover from a setback that is critical. If you say, “It’s all right. I’ll come up with a new plan, and press onward,” you’re probably coping well and maybe on your way to success. But if you’re like Jim, who seems to have difficulty facing a setback, you’ll probably expend an enormous amount of energy mulling over your mistakes, trying to avoid taking responsibility for them, and passively hoping for a solution that is unlikely to come to you. It’s vital that you face setbacks straight on, take active steps to overcome them, and then press on until you build the requisite trading skills to trade profitably and consistently. 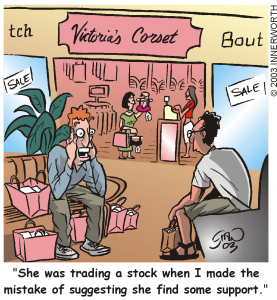 There are two general ways to cope with setbacks: a passive denial of the problem or an active problem-solving approach. Most people work under the assumption that it is easier to deny or avoid a setback than to deal with it head-on. When you’ve mounted major trading losses, it’s difficult to accept. A plethora of pessimistic thoughts run through your mind: “Maybe I’ll never be a successful trader. Perhaps I’m just fooling myself. Maybe I just don’t have the talent or natural ability to trade profitably.”

As with any challenging skill, these kinds of unproductive beliefs are bound to enter your mind occasionally. The problem with succumbing to these beliefs is that you will feel down, distressed, and beaten. And your psyche will naturally try to protect itself through denial. You may try to push these thoughts out of your consciousness, but when you do that it just makes matters worse. It takes more psychological energy to deny the significance of a setback than to just acknowledge it, accept that you may question your skills and abilities, and most importantly, take active steps to conquer your fears and limitations.

Rather than passively trying to avoid facing a setback, and the natural anxiety and fear that you may feel, it’s more useful to take an active problem-solving approach. Consider Jim’s situation. He’s made a series of losing trades and he is questioning his abilities. Rather than mulling over the losses and feeling as if he wants to give up, it’s more useful for Jim to consider taking active steps to remedy the situation. For example, if he has strong evidence that his methods are sound, he shouldn’t take the losses personally; he should just mechanically execute trade after trade and let the law of averages take care of the rest.

On the other hand, if he feels that his methods are shaky, he should step back, find more solid methods and test them out by making a small set of practice trades. Or he might lower his standards temporarily. Perhaps he doesn’t have the requisite knowledge and experience to expect such a high-performance standard. It may be more useful to set a learning goal rather than a performance goal. That is, he may want to make his goal to spend 20 hours a week gaining training and knowledge than making a 20% return, for example.

Whatever strategy he takes, he must take active steps rather than passively deny the problem. He must feel that he is addressing the setback with a decisive and effective game plan. By taking active steps, he will no longer feel fear and anxiety. He’ll feel a sense of mastery and control. He’ll feel optimistic and ready to tackle the problem.

All traders are bound to face setbacks, especially when first starting out. Most people, however, aren’t used to facing the many and potentially devastating setbacks most traders face. Rather than give in to feelings of pessimism, self-doubt, and passivity, it’s essential that you take an active problem-solving approach. You’ll feel energized, empowered and ready to face the challenges encountered by anyone who strives to become a consistently profitable trader.