It can be said over and over again, “Don’t let your net worth determine your self-worth,” but it is little solace to those people who have spent their entire lives letting their successes and failures determine how they feel about themselves. Even if you have fairly high self-esteem, it’s hard not to feel a little disappointed when you aren’t making enough winning trades, or are experiencing a severe drawdown. From childhood to adulthood, we are told that unless we do well in society, we are not worthy. 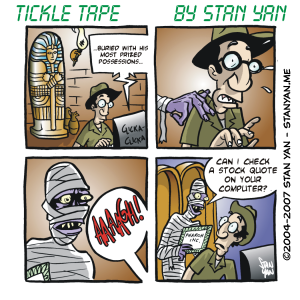 It’s important to do well, and if trading is your profession, a series of losses can be devastating to your self-esteem. Not all people link their self-esteem to how well they are performing at their job, but if you are one of the people who do make your feelings of self-esteem contingent on how well you are doing in the markets, coping with losses can be psychologically painful. However, a study in the December 2004 issue of “Psychological Science” offers a remedy (Niiya, Crocker, and Bartmess, 2004).

Dr Jennifer Crocker and her colleagues at the University of Michigan have been studying college students who base their self-esteem on how well they are doing in school. They have shown that the more college students’ self-esteem is based on, or contingent on, their academic performance, the greater their drops in self-esteem on days when they receive worse-than-expected grades on exams and papers. The same phenomenon is seen among novice traders. Traders who let their self-esteem be dictated by the number of winning trades they make on a particular day experience a rollercoaster ride of emotions, ranging from omnipotence on winning days to feelings of despair and hopelessness on losing days.

In a recent experiment, Niiya, Crocker, and Bartmess (2004) showed how people who base their feelings of self-worth on performance can cope with failure more easily. Whether a person feels a sense of low self-esteem after a failure depends on how one views a particular talent or ability. If a person believes that talent or ability is trait-like and unchangeable, he or she will experience low self-esteem after a failure.

If on the other hand, a person believes that talent or skill can be improved and honed through experience, he or she will be less upset after a failure. Participants were randomly assigned to either fail or succeed after completing an academic task. Half of the participants were “primed” to think that intelligence was a fixed entity that could not be changed, while the other half were reminded that intelligence isn’t permanent and trait-like, but can be modified with practice and experience.

People who allowed their self-esteem to be determined by performance and who believed that intelligence was fixed and unchangeable felt low self-esteem after a failure. In contrast, people who believed that intelligence was malleable didn’t report lower levels of self-esteem after a failure. This finding has a direct bearing on how to cope with trading losses. Don’t over-interpret losses. A series of losses doesn’t mean that you’ll never learn to trade profitably. With training, practice, and experience, you can hone your trading skills.

Sure, we can say over and over again, “Don’t let your self-worth be determined by your wins and losses,” but for some people that just don’t help. They’ve been basing their self-esteem on how well they perform their whole life. It’s hard to change overnight. But these people aren’t doomed to wavering self-esteem. If they merely remind themselves that trading can be learned and that you don’t need to be a “natural born trader” to make it in this business, then you won’t be as disappointed by your losses.

Don’t expect to trade skillfully immediately. Some novice traders may catch on fast, but that shouldn’t get you down. With training and practice, you can also hone your trading skills and learn to trade profitably. The more you remind yourself of this fact, the more you can bolster your self-esteem when you face losses. So don’t give up. If you are the kind of person who sees your self-esteem rise and fall with your account balance, stay relaxed, and remember that traders are made not born. If you remember this fact, you’ll eventually master the markets and achieve enduring success.