The movie “Rogue Trader” illustrates how psychological motives can be the downfall of any trader. Nick Leeson was a young trader out to prove himself. His trouble started when a young member of his trading team mistakenly bought contracts when she was supposed to sell them.

The mistake was obviously a small financial disaster. To save her job, Nick decided that he could make up the losses without his superiors knowing about the mistake. He succeeded, but his short-term financial triumph set a bad precedent. Nick erroneously thought he could repeatedly make a big financial loss, cover it up, and make up the losses later. But Nick’s actions eventually led to the downfall of Barings Bank, an institution with a glorious past, including the financing of the Napoleonic Wars, the Louisiana Purchase, and the Erie Canal. 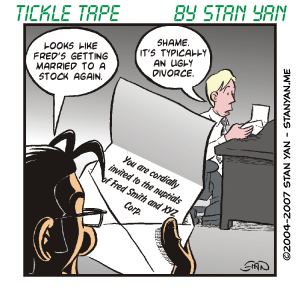 As general manager of Barings future trading operations in Singapore, Nick bet Japan’s stock market would rise. But it slumped after the Kobe earthquake. During the slump, he doubled his bets hoping to recoup his losses. Every loss was hidden in a secret “error account” so his office would always appear profitable. As the losses grew Leeson acquired extra funds by various means, sometimes illegal, to continue trading. He hoped against hope that he could turn it all around.

In the end, he struggled with his own demons: He wanted to please his working-class parents, persuade his beautiful wife that he was successful, and please his superiors, allowing them to think he was a trading genius. The tale of Nick Leeson is dramatic enough for a movie plot, but it also exemplifies the very human need to win, even when it means fooling ourselves and others.

Many times, we are so desperate to win that we deny our shortcomings, and believe that we can do anything. But, in the end, we are merely hiding from ourselves and others. It’s a common ailment, large corporations don’t want to see how poorly things are going and stay on a failing course of action. And individual traders and investors similarly have difficulty seeing financial problems.

It’s vital to stay brutally honest. Everyone makes losing trades, and when you make a losing trade, it’s useful to remind yourself that if you identify the problem quickly, you can climb out of a seemingly bottomless pit. Nick Leeson should have followed this advice. At one point he was “merely” in millions of dollars in debt, but because of his denial, he ended up losing hundreds of millions. The same thing happens to everyday traders; a “mere” $10,000 loss could end up as $100,000, either from one trade or a series of trades over many years. It’s vital to monitor your trades and face how much you are making or not making.

It may hurt at first, but it is important to remember that things could be worse, and if you take decisive action early, you can prevent them from getting worse. So don’t hide from yourself or others. Go your own way. You have no one to please but yourself. So what if you don’t live up to your expectations? Lower them, and feel good about yourself and what you have done, no matter what it is. And don’t try to save face. Don’t hide from yourself or others. Face the facts, take decisive action, and solve any problem that comes up as quickly as possible. In the long run, you’ll end up profitable, and successful.