Have you ever watched a herd of cattle as they graze in an open field?  It’s quite remarkable. The cows seem content as they eat the grass and stand in a scattered formation.  Then, suddenly, for no apparent reason, one cow decides it has eaten enough, turns toward the barn and starts walking.  All of the rest of the cows seem to follow, one by one until the entire herd is moving in a straight line toward the barn.  It is as if the cows are thinking, “Where’s that guy going? What’s he going after? I want to get in on this action. I’m going to follow him.”  They follow the leader even though the leader does not seem to know what it is doing.

That’s an extreme example of the herd mentality that some market observers see as analogous to the markets.  One person starts buying, then another person, and so on, and so on, until a group of traders are all buying, for no apparent reason. Although humans have more intelligence than cattle, there is an inherent instinct to follow the crowd.  It’s as if everyone is thinking, “All of these people can’t be wrong.” 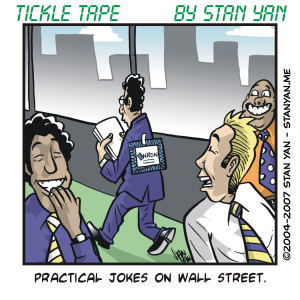 It makes sense to follow the crowd sometimes.  In a bull market, prices continue to rise, so it makes sense to buy and hold.  But, when market conditions change, you better be careful to not let the traders in the back of the herd trample you when you try to stop to avoid hitting a brick wall.  The crowd is usually right until a turning point occurs. Why? When virtually everyone has taken the position that the market is headed in a particular direction, there are few traders left to push the trend further.

At that point, a countertrend initiates and moves the market in the opposite direction. The trick is predicting when that turning point will occur, anticipating it, and developing a trading plan to capitalize on it. In the Art of Contrary Thinking, Humphrey Neill discusses how to take a contrary opinion.  Taking a contrary opinion is not merely doing the opposite of what everyone else is doing.  A true contrarian creatively studies the markets and tries to devise an innovative trading plan.  It takes a great deal of experience and thought. One must train his or her mind to think in directions that are opposite to prevailing opinions.  It’s sort of like thinking in reverse. Think of reasons why the crowd may be wrong. Try to discover factors that may predict a change in market conditions, or identify new sectors that may prosper from the change.

For example, during the Great Depression, consumers tended to stay home and listen to the radio, rather than go out to see movies or shows. Thus, radio companies made profits in a time of economic scarcity. A contrarian identifies such opportunities and capitalizes on them.

Taking a contrarian approach is useful, but it’s often hard to fight the herd instinct.  While trading, people have a natural inclination to see what everyone else is doing and to follow.  It feels safe and comfortable. But, if one is not careful, following the crowd can lead to disaster.  The crowd can be wrong. So, always think like a contrarian. Study the markets carefully. Consider why the crowd may be wrong.  Search for evidence that supports the contrarian position. If you are right, you can capitalize on it, and make a big win.