We’ve been bombarded with stories about Martha Stewart all weekend. The media can’t seem to let up. If you haven’t heard, Ms Stewart was found guilty of giving false statements to government officials. The analyses by the media are endless: Was she a convenient target? Could she have prevented her prosecution? How much of a crime is her deception relative to other corporate scandals? Perhaps the last thing you want to read is another column about Martha Stewart, but we just can’t help ourselves. 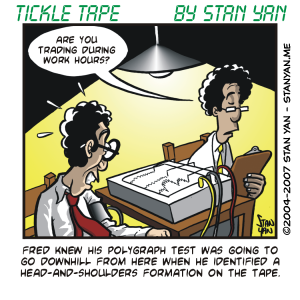 Martha Stewart’s predicament is fascinating. It illustrates some basic frailties of human nature, issues that traders face at some level every day. It may not be fair to sift through and speculate about what Ms Stewart could have done to avoid the trouble she is now in, but there are at least three things she could have done to avoid it: Write off a relatively small loss, admit one’s mistakes, and don’t let the powerful motive to protect one’s reputation interfere with sound decision making. We’ve covered these three issues in previous columns. They are common human shortcomings, and most traders would be wise to gain awareness of them and prevent them from fowling their trading plans.

People are risk-averse. They don’t like losses and they tend to do whatever they can to avoid a loss. But it’s often better to just write off a loss, rather than hold on to it and let it compound. In discovering from her broker that ImClone CEO Sam Waksal was selling off his shares, Ms Stewart should have just written off the loss. Relative to her overall wealth, the loss Ms Stewart would have realized would have been minimal.

She would have saved herself a great deal of trouble if she would have just let ImClone announce that their experimental cancer drug would not receive federal approval, let the stock price drop as a result, and just sell off her remaining shares later at a relatively minimal loss. But again, it’s hard for people, even Martha Stewart apparently, to face losing money. Humans will do whatever they can to avoid taking a loss.

Another human frailty is that people have a need to be right. They don’t like admitting they made a mistake. For many, the first line of defence is to deny to themselves or others that they are in trouble. For example, when adverse conditions spoil your trading plan, it’s better to just admit things have gone wrong, think strategically about what to do next, and do whatever it takes to remedy the situation.

Don’t try to hide your mistakes. In Ms Stewart’s case, we now know that she would have been better off just admitting she made an error in judgment to government officials and suffered the immediate consequences. Instead, she tried to cover up the mistake and in the end, was prosecuted for it. The same kind of thing can happen while trading. A simple mistake can compound. Short-term unpleasant effects, which weren’t so bad, can turn into big problems that have long-term consequences.

Finally, there is a powerful need to protect one’s reputation. This is true of independent traders and large corporations alike. To save face, one is willing to do almost anything. The independent trader may want to hide losses from his or her spouse, family, or friends. Protecting one’s reputation is a powerful motive. Don’t underestimate it. If you brag to your friends and tell them how you are a “natural born trader,” you’ll be afraid to admit to them and yourself that you have limitations.

It’s better to stay humble. No one is superhuman. By keeping your feet on the ground, you’ll be able to weather a severe drawdown when you experience one. It’s understandable that Ms Stewart would want to similarly protect her reputation. Her entertainment empire was built on her name and reputation. A sullied reputation would surely mean a sharp drop in share prices. But in hindsight, we now know that Ms Stewart would have been wise to just forget about her reputation and protect own self-interests, that is, avoid jail time. As it currently stands, there may be no reputation or company to protect any longer.

The Martha Stewart saga is just one of the many tragic stories that can teach traders about the limitations of human nature. Don’t underestimate the influence of psychological motives and processes. Admit your limitations. Everyone has them, and so do you. Stay humble, honest, and ready to face your own shortcomings as a trader. If you can do so, you will stay consistently profitable over the long haul.