“I’ll worry about it later.” When trying to deal with the fact that we must eventually cope with an onerous, unpleasant event, such statements help us get through life. We often put off things we don’t want to do, hoping that we will muster enough energy and enthusiasm to deal with them in the future. Take your 2005 taxes, for instance. The last day of 2005 was last Saturday. Why not start working on your taxes today? Most people avoid gathering and organizing their financial records until they need to. We prefer to put off facing an unpleasant reality, such as doing our taxes, until the very last minute. We have until April 15th, right? The same thing seems to happen when we make investment decisions. A study by Dr. Michael Sagristano and colleagues suggests that people may be willing to invest in low probability setups as long as they don’t have to deal with the consequences of the trade immediately (Sagristano, Trope, & Liberman, 2002). 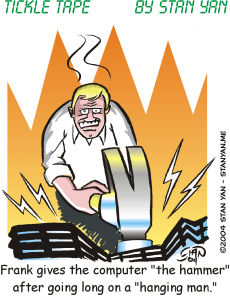 These research findings may explain how decisions about long-term investments are made. When it comes to long-term investments, people are willing to risk money on a low probability setup as long as they believe the potential profit is high. This is somewhat irrational, however. The probability of success is an important element when deciding whether to risk capital. It doesn’t matter whether it is a long-term investment or a short-term trade, a trade setup should have a high probability of success. But people have a natural human tendency to accept a low probability setup as long as they don’t have to face the outcome until the distant future, and they believe that the potential payoff is high.

When making investment decisions, however, it’s necessary to consider all possible aspects of a trade. It is essential to always trade high probability setups. If you trade low probability setups, you are likely to lose money in the long run. But greed can bias our investment decisions. If we believe that the potential profits from an investment are high, we tend to irrationally invest capital even when the odds of success are low. In the end, however, it’s more beneficial to look for setups that have a high probability of success, even if it means standing aside until we find them.