Jack is a novice trader celebrating his latest win. “I’ve just made a big profit on trade by pure chance,” Jack says in an excited tone. “I went long on a stock, expecting it to go up about .90 points. I was wrong. It went down .50 points, but I figured I might as well just wait it out to see what happened next. At the end of the day, it was up .60 points past my entry and I sold for a profit.” His friend asks, “Did you have any idea that the stock would rebound?” “No,” Jack replied, “I was just lucky.” 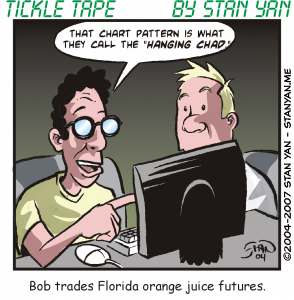 Does this scenario sound familiar? Jack anticipated that the stock would go up, but when it went down, he didn’t follow a trading plan. He was ready to accept whatever fate offered. But “all is well that ends well,” right? Well, maybe not. Jack did make a big profit, but at what psychological cost? He didn’t have a clearly defined trading plan. He put on a trade, and as a result of pure luck, he made a profit. Such situations may provide a short-term pleasure, but they can adversely influence discipline in the long term.

Rather than developing a well-defined trading plan, following it, and getting rewarded by trading it, a trader puts on a trade haphazardly and is coincidently rewarded. In this case, a lack of discipline is rewarded, and this unjustified reward may increase a trader’s tendency to abandon trading plans in the future because he or she has been rewarded for doing so in the past. However, the positive outcomes are usually short-lived, and a lack of discipline ultimately produces trading losses.

Cultivating discipline is vital for consistent and profitable trading. Trading is basically capitalizing on chance. One implements proven trading strategies, over and over, so that across a series of trades, the strategies work enough to produce an overall profit. It’s like making shot after shot on the basketball court so as to accumulate a winning number of points. The more shots you take, the more likely you will amass points. But the winning player is the person who first develops the skill to make the shot consistently so that at every possible opportunity, the ball is likely to go through the basket.

To a great extent, consistency is key. If the player uses one approach one time, and a different approach at another time, performance is haphazard. It’s the same for trading. One must trade consistently, following a specific trading plan on each and every single trade. This allows the law of averages to work in your favour so that across the series of trades, you will make an overall profit. If you follow the plan sometimes and abandon it at other times, you throw off the probabilities.

Suppose you used a strategy that had a track record of 80%. Under the best-case scenario, you could only expect to win 80% of the time. But since history doesn’t always repeat itself, it’s likely that you will win less than 80% of the time. If you don’t execute the trading strategy the same way each time, you will decrease your winning odds. And fewer winning trades may mean an overall loss. That’s why discipline is so important.