The module on Personal Finance has come a long way with over 30 chapters. I can easily think of another 10 or 15 chapters to add, but I won’t do that 🙂

I think we have covered the major chunk of personal finance, i.e. investments (via mutual funds), and in the process, discussed a ton of other information. I hope you’ve found this module useful.

I want to end this module with a chapter on Macro Economics.

What is the connection here?

You like it or not; your financial fortune is highly dependent on how the country as a whole does; this is especially true when you save for long and hyper long-term investment goals like retirement.

Imagine this; you set retirement as your financial goal. As a part of this, you do your bit diligently, i.e. select your mutual funds carefully, save regularly, increment your savings by the year, and stick to the course and not succumb to the temptation of pulling out the funds during the tenure.

However, the country you reside in happens to default on its borrowings and suffers from never-ending geopolitical and civil unrest.

Given the situation, do you think your savings will do well?

Or think about a situation that your country at the cusp of a big bang economic reform, with an extremely supportive demographic profile and a super-competent Government. But you fail to see through these shining opportunities and instead decide to play safe and invest your hard-earned money in gold.

Do you think you’d have taken the right investment decision here?

In this chapter, I’ll stick to basics and help you understand the absolute essential macroeconomic principles. If the topic interests you’d, I’d suggest you pick up any good undergraduate book on macroeconomics and read through it. I’m sure you won’t regret it 🙂

I understand this is an absolute basic metric to start our discussion, but we will start with it for the same reason. Many of you may be familiar with it; if yes, please feel free to skip this section. For those who are not familiar with ‘GDP’, let me tell you a quick story.

After my sister’s marriage in 2002, she moved to Coimbatore, Tamil Nadu. I was in my early 20’s, and I’d often make weekend trips to Coimbatore to visit her and spend a few days with her. My sister had a very interesting neighbour in Coimbatore, and she would often tell me stories about them. On one of my visits, I got to meet the neighbours as well.

The neighbour’s house had three family members – husband and wife, both in their mid 50’s and a teenage daughter. Husband managed a steel kitchenware shop, which sold household items like rice cooker, pots, and pans. His wife managed a small homemade papad and pickle business, and the teenage daughter taught classical dance to the neighbourhood kids.

All three members of the house had an economic output. Given my unnecessary curiosity, I remember trying to figure out how much money this family made. I don’t remember the exact math, but I remember these numbers; I estimated that –

Give or take, this small and admirable family’s monthly income was anywhere between 2.3 to 2.8L per month or about 34L per year on a gross basis. This family had no other source of income. In other words, 34L was the total economic output of this family after accounting for all the products and services collectively sold by this family. In a sense, I think it is ok to conclude that the family’s Gross Domestic Produce’ (GDP) was 34L per year.  If you realized, GDP here represents the total value of the economic output of the family, which includes goods sold (kitchenware), products manufactured and sold (papad and pickle), and services offered (dance classes).

Or in other words, a growing GDP is a healthy economic sign. We all want the GDP of the country to increase.

Have a look at the Indian GDP ranking –

I’ve got this from Wikipedia, where they have tabulated the 2020 GDP rank of countries as per various estimates (IMF, World Bank, and UN).

India ranks around 6th or 5th, and the GDP itself is pegged to 2.6 to 2.9 Trillion USD. Do recollect, the collective economic output of India is estimated between 2.6 – 2.9 Trillion USD. We are just below China, Japan, UK, and Germany.

While it is great to know we are in the top 5 GDPs of the world, it is also important to understand how our GDP grows. After all, we want to be better than being in the top 5, and we want to get there as quickly as possible.

The technique of estimating the GDP growth rate is beyond this discussion’s scope; we won’t get into that today but will use the widely accepted number.

Now, when it comes to measuring the GDP growth, there are two terms you should familiarize yourself with –

Both these growth rates measure the speed at which the GDP grows; if you guessed right, these rates are the CAGR of the GDP. Do recollect; we have discussed CAGR several times in this module.

To put this in context, take a look at this new paper headlines –

The reference point here is the ‘nominal growth’ rate.

Do take a look at this snapshot; it estimates the real GDP growth at 5% –

The snapshot is from the Department of Economic Affairs; you can read the entire paper here – https://dea.gov.in/sites/default/files/March%202020.pdf.

I also found this interesting chart from the same paper; I thought I’d share it here for your quick reference – 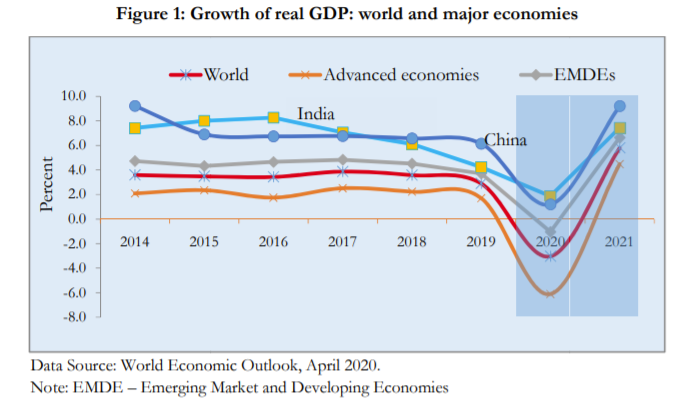 Thanks to COVID, most of the economies (from the GDP perspective) took a hit in 2020. But they are all expected to bounce back up in 2021 and perhaps 2022. Whether this will pan out as per estimates or not is an unknown. But the stock markets at least seem to factor this 🙂

Anyway, at this point, I want you to take a break and think about this –

How is this relevant to personal finance?

We have discussed the concept of market cap earlier in Varsity. For those of you not familiar with market cap, here is a quick note –

Assume the stock price of a certain company is Rs.75/- per share. Further, assume that the company has only 1000 shares outstanding of this company.

The market cap of this company is –

The total outstanding shares of this company are constant, but the stock price fluctuates daily. The higher the stock price, the higher is the market cap and vice versa.

Now assume another company has 2000 shares outstanding, and the stock price is 105 per share. The market cap of this company is –

One of the direct established correlations is that as the country’s GDP improves, so will the market cap. If the market cap does well, then equity investments are bound to well. We have seen this happen in the past.

So when you look at the GDP data, think about how the country is placed in terms of GDP, and it is expected to do over the next 5 or 10 years.

For instance, here is a thought about the Indian GDP situation –

Even if India did nothing spectacular or did nothing stupid to degrow, then under a decent real GDP growth rate (and slow down in developed countries), the GDP rank is bound to increase.

No think about a growing GDP plus the largest democracy globally, and top it up with a large working population; what do you expect?

Will this happen overnight? No.

Will this happen over the next 1-2 years? Maybe not.

Will this happen over the next 8-10 years? Well, it seems likely.

Hence, the need to stay invested for a longer-term.

Now think about India as a company. The company’s management is the Government, which is democratically elected. The company has a few revenue sources, mainly in terms of taxes, and the company also has expenses mainly in terms of capital and revenue expenses. If the income minus expense is positive, that’s a surplus to the country, else a deficit.

Take a look at the snapshot below; I’ve got this from the website of Controller General of Accounts; here is the link – 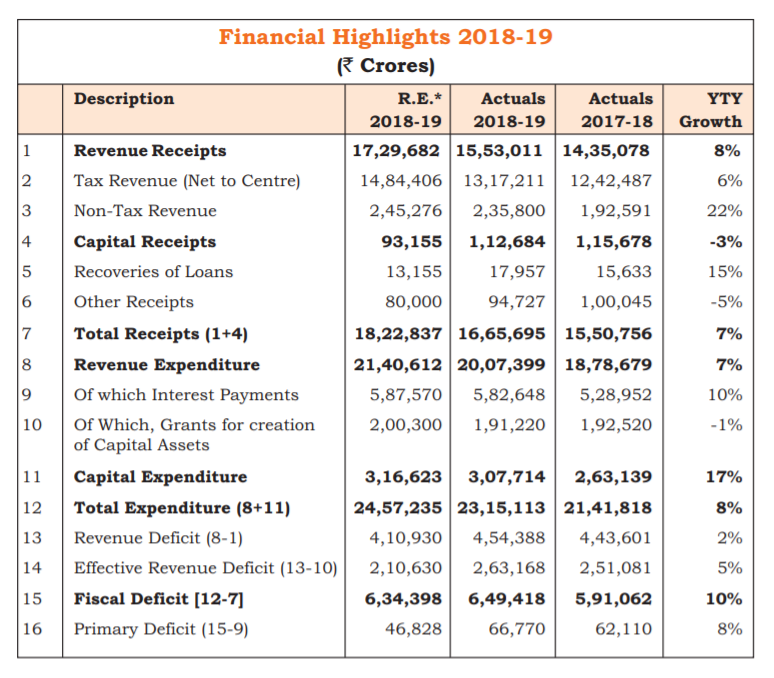 The data you see above is for the Financial Year 2018-19, represented in Rupee Crores. Let us break this down to understand the numbers better.

Taxes Revenue – Tax revenue includes all sorts of taxes that the Government collects. Broadly, taxes can be classified as ‘Direct Taxes’ and ‘Indirect Taxes’. The direct taxes include taxes paid by individuals, called the ‘Personal Income taxes’ and the corporates’ taxes, called the ‘Corporate Income tax’.

Indirect taxes mainly include the tax in the form of ‘GST’.

As you can see, India Inc collected close to 14.8L Crore as taxes in 2018-19; this includes both direct and indirect taxes.

Remember, when GST is charged, a portion goes to the state and a portion to the centre. Hence when you look at 14.8LCr, this is the ‘net to the centre’, which means that the actual tax collection is higher than 14.8L Cr. Of course, you can get the exact value by inspecting this report further, but I’ll refrain from doing so. But if I remember right, roughly 2/3rd is retained by the centre, 1/3 is distributed to states.

Total revenue is the sum of these two revenue lines, which is roughly 18.2L Cr.

The Government has expenses, and these expenses can be categorized into two buckets, i.e. the ‘Revenue Expenditure’ and ‘Capital Expenditure.

Revenue Expenditure – These expenditures include subsidies across various Government schemes, salaries to Govt employees, interest payments etc. The revenue expenditure is a big bill that the Govt has to pay, and as we can see from the snapshot, this bill stood at 21.4L.

As a long-term investor, you need to keep track of trends in these spend patterns and get a sense of how the country is evolving.

So, on the one hand, Govt collected revenue of 18.2L Cr, and on the other hand, the expenses stood at 24.57Cr. The expenses are much higher than the income. The negative difference, i.e. to the extent of nearly 6.3L Cr, is called the ‘Fiscal Deficit’.

From the same report, I’ve pulled the GDP data – Any macroeconomic debate or discussion, this is the ratio that gets spoken about the most. The Government puts in massive efforts to contain the Fiscal Deficit to GDP ratio to sub 4%.

To put this in perspective, do check this extract from Wikipedia –

The US’s fiscal deficit as a percentage of GDP is nearly 4.7%, which is quite staggering.

While at it, we can crunch one more data point, i.e. net tax collected as a percentage of GDP –

If we include the share of state’s, this ratio is roughly at 11-12%. Tax collection as a percentage of GDP is an important metric; remember, the higher the tax collection, the higher is the revenue, which means the probability of shrinking the fiscal deficit is higher.

Again, to remind you, you need to track these numbers to understand how the country operates. Remember, when you invest in the long term, your fortunes depend on how your investments perform, depending on how India as a country performs.

Without a sense of these basic details, it is equivalent to investing in the dark.

I’ll end this discussion here; as you can imagine, the topic is vast, and we have only scratched the surface 🙂

With this, we are at the end of this module on Personal Finance module; I hope you’d enjoyed reading this, as much I enjoyed writing this for you.