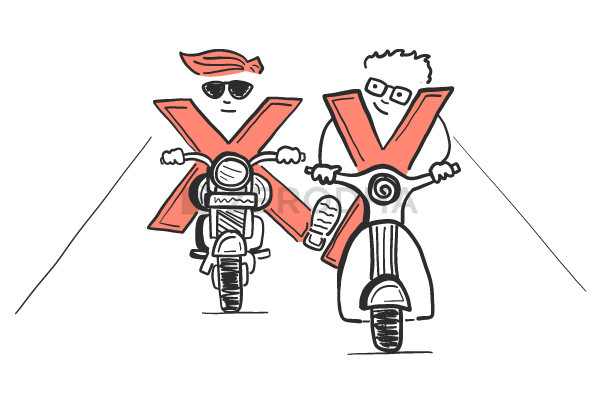 I hope the previous chapter gave you a basic understanding of linear regression and how one can conduct the linear regression operation on two sets of data, on MS Excel. Remember, we are talking about two variables here – X and Y.

X is defined as the independent variable and Y is the dependent variable. If you’ve spent time thinking about this, then I’m certain you’d have guessed X and Y will eventually be two different stocks.

In fact, let us just go ahead and run a linear regression on two stocks – maybe HDFC Bank and ICICI Bank and see what results we get.

I’m setting ICICI Bank as X and HDFC Bank as Y. A quick note on data before we proceed –

Here is how the data looks – 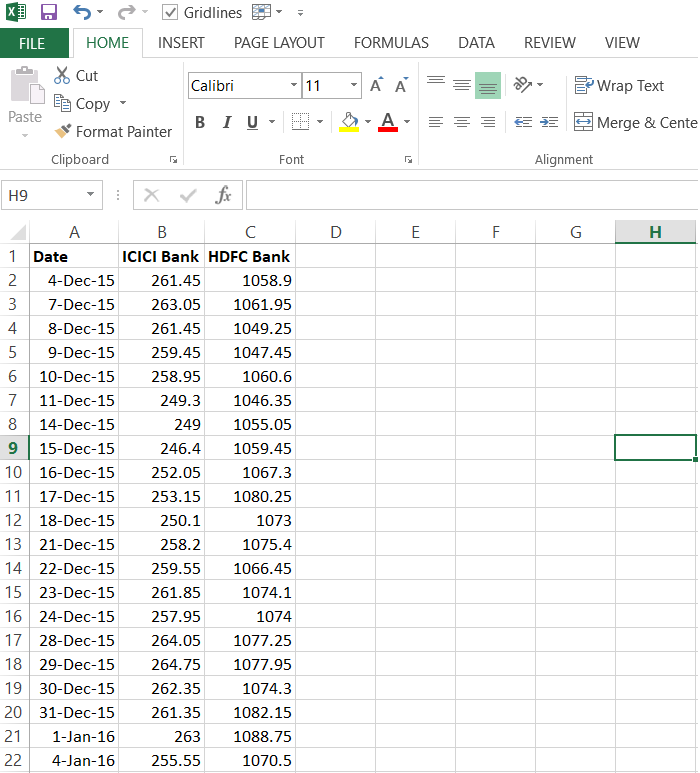 I’ll run the linear regression on these two stocks (I’ve explained how to do this in the previous chapter), also do note, I’m running this on the stock prices and not really on stock returns – 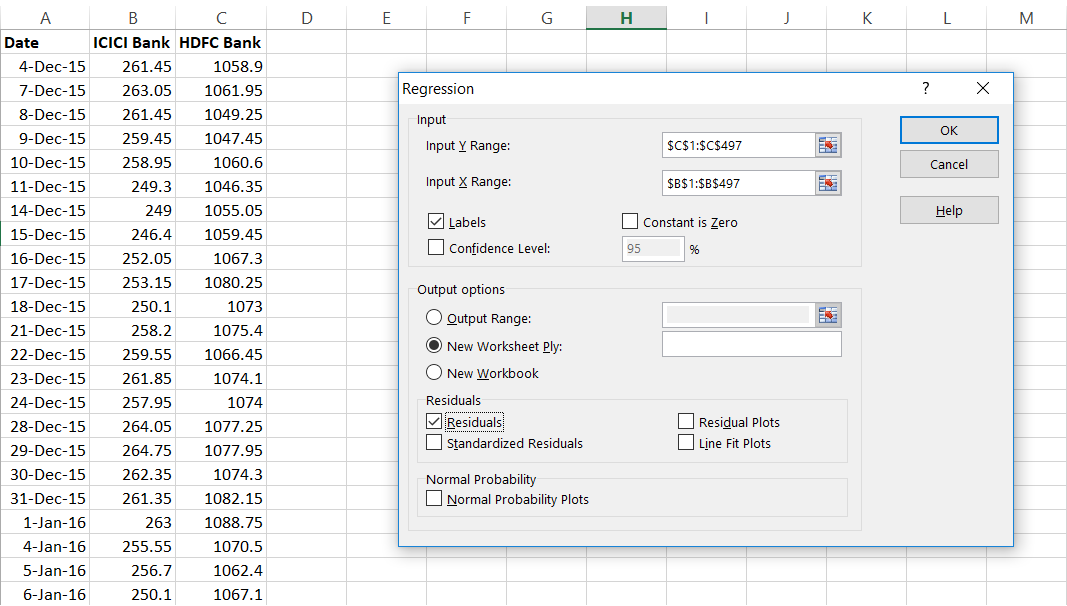 The result of the linear regression is as follows – Since ICICI is independent and HDFC is dependent, the equation is –

I’m assuming, you are familiar with the above equation.  For those who are not familiar, I’d suggest you to read the previous two chapters. However here is the quick summary – the equation is trying to predict the price of HDFC using the price of ICICI.

Or in other words, we are trying to ‘express’ the price of HDFC in terms of ICICI.

Now, let us reverse this – I will set ICICI as dependent and HDFC as the independent.

Here is how the results look – 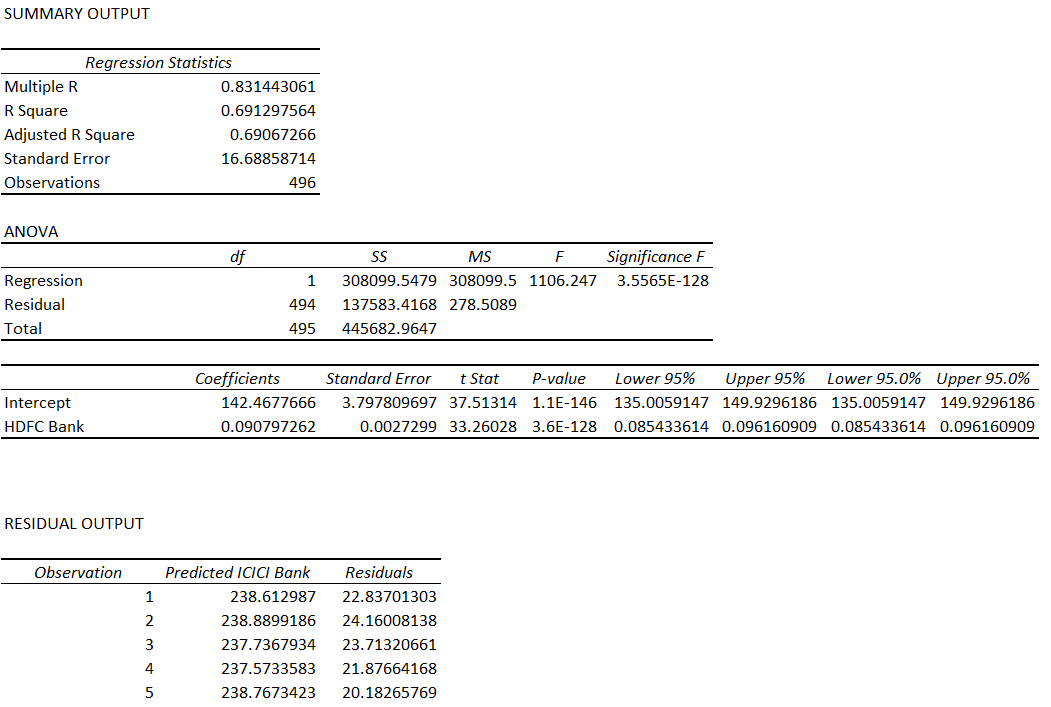 So for the given two stocks, you can regress two ways by reordering which stock is dependent and which one is the independent variable.

However, the question is – how do you decide which one should be marked dependent and which one as independent. Or in other words, which order makes the most sense.

The answer to this depends on three things –

Remember, the linear equation above, essentially express the variation of price of ICICI in terms of HDFC (refer to the equation above). This expression or explanation of the price variation of one stock by keeping the price of the other stock as a reference can never be 100%. If it was 100%, then there is no play here at all.

Having said so, the equation should be strong enough to explain the variation in price of the dependent variable as much as possible, keeping the independent variable in perspective. The stronger this is, the better it is.

This leads us to the next obvious question – how do we figure out how strong the linear regression equation is? This is where the ratio – 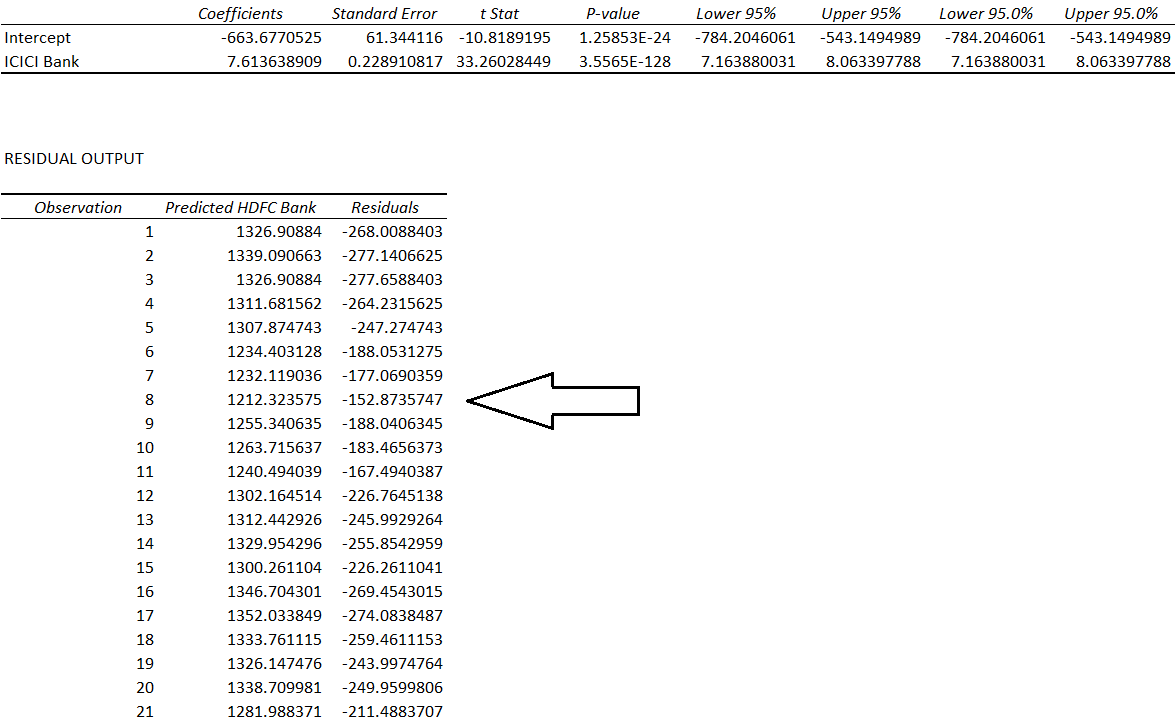 When I talk about the regression equation and the residuals, usually, I get one common question – what is the use of regression if there is a residual each and every time? Or in other words, how can we rely on an equation, which fails to predict accurately, even once.

This is a fair question. If you look at the residuals above, they vary from a low of -288 to a high of 548, so using this equation to make any sort of prediction one price is futile.

Let me give you a heads-up here – the residuals display a certain behaviour.  If we can understand this behaviour and figure a pattern within it, then we can rework backwards to construct a trade. This trade obviously involves buying and selling the two stocks simultaneously, hence this qualifies as a pair trade.

The standard error is one of the variables which gets reported when you run a linear regression operation. Here is the snapshot showing the same –

In fact, let me manually calculate the standard error of the residuals, I’m doing this for X = ICICI and y = HDFC 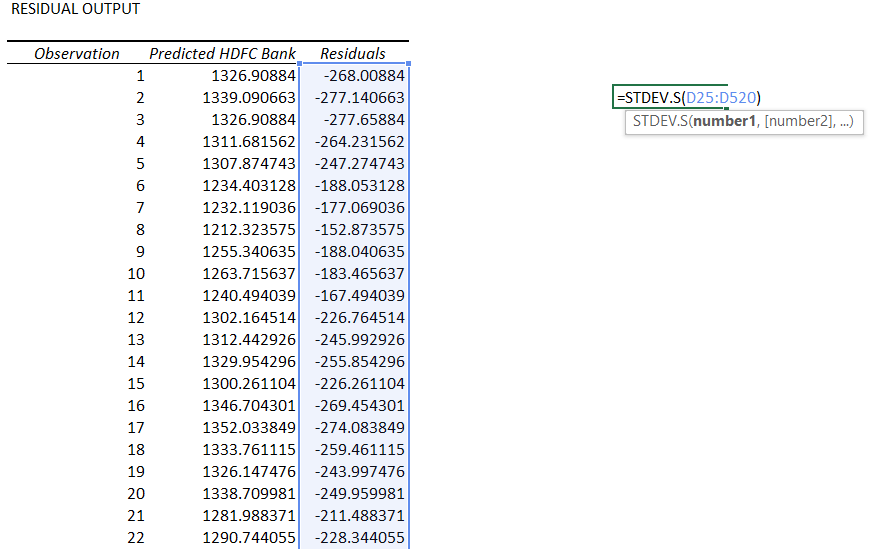 And excel tells me the standard deviation is 152.665. The standard error as reported in the summary output is 152.819. The minor difference can be ignored.

If you realize, here both M and C are estimates. And how are they estimated? They are estimated based on the historical data provided to the regression algorithm. The data can obviously contain noise components and few outliers. This implies that there is a scope for the estimates can go wrong.

The Standard Error of the Intercept is the measure of the variance of estimated intercept. It helps up understand by what degree the intercept itself can vary. So in a sense, this is somewhat similar to the ‘Standard Error’ itself. To summarize –

Now that we have defined both these variables, let’s bring back the ‘Error Ratio’. Please note, the term ‘Error Ratio’ is not a standard term, I’ve come up with it for ease of understanding.

Anyway, the error ratio, as we know –

I’m calculated the same for –

I’d love to explain the reason as to why we are using the error ratio as the key input for designating X and Y, but I guess I will hold back. I’ll revisit this again when I take up pair trade example.

For now, remember to calculate the error ratio and estimate which stock should be dependent and which one will be the independent.

You can download the excel sheet used in this chapter here.

Key takeaways from the this chapter