I guess this chapter will get a little complex. We would be skimming the surface of some higher order statistical theory. I will try my best and stick to practical stuff and avoid all the fluff. I’ll try and explain these things from a trading point of view, but I’m afraid, some amount of theory will be necessary for you to know.

Given the path ahead I think it is necessary to re-rack our learnings so far and put some order to it. Hence let me just summarize our journey so far –

I hope you have read and understood everything that we have discussed up to this point. If not, I’d suggest you read the chapters again, get clarity, and then proceed.

Recollect, in the previous chapter, we discussed the residuals. In fact, I also mentioned that the bulk of the focus going forward will be on the residuals. It is time we study the residuals in more detail and try and establish the kind of behavior the residuals exhibit. In our attempt to do this, we will be introduced to two new jargons – Cointegration and Stationarity. 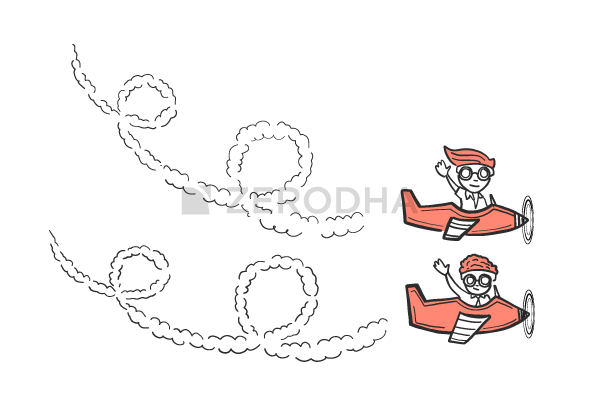 Generally speaking, if two time series are ‘co integrated’ (stock X and stock Y in our case), then it means, that the two stocks move together and if at all there is a deviation from this movement, it is either temporary or can be attributed to a stray event, and one can expect the two time series to revert to its regular orbit i.e. converge and move together again. Which is exactly what we want while pair trading. This means to say, the pair that we choose to pair trade on, should be cointegrated.

So the question is – how do we evaluate if the two stocks are cointegrated?

Here is an interesting way to look at this – one can take any two-time series and apply regression, the regression algorithm will always throw out an output. How would one know if the output is reliable? This is where stationarity comes into play. The regression equation is valid if and only if residuals are stationary. If the residuals are not stationary, regression relation shouldn’t be used.

Speculating and setting up trades on a co-integrated time series is a lot more meaningful and is independent of market direction.

So, essentially, this boils down to figuring out if the residuals are stationary or not.

At this point, I can straight away show you how to check if the residuals are stationary or not, there is a simple test called the ‘ADF test’ to do this – frankly, this is all you need to know. However, I think you are better off if you spend few minutes to understand what ‘Stationarity’ really means (without actually deep diving into the quants).

So, read the following section only if you are curious to know more, else go to the section which talks about ADF test.

The three simple statistical conditions are –

I guess it is best to take up an example (like a sample time series) and figure out what the above three conditions really mean and hopefully, that will help you understand ‘stationarity’ better.

For the sake of this example, I have two-time series data, with 9000 data points in each. I’ve named them Series A and Series B, and on this time series data, I will evaluate the above three stationarity conditions.

To evaluate this, I will split each of the time series data into 3 parts and calculate the respective mean for each part. The mean for all three different parts should be around the same value. If this is true, then I can conclude that the mean will more or less be the same even when new data points flow in the future.

So let us go ahead and do this. To begin with, I’m splitting the Series A data into three parts and calculating its respective means, here is how it looks –

Like I mentioned, I have 9000 data points in Series A and Series B. I have split Series A data points into 3 parts and as you can see, I’ve even highlighted the starting and ending cells for these parts.

The mean for all the three parts are similar, clearly satisfying the first condition.

I’ve done the same thing for Series B, here is how the mean looks – 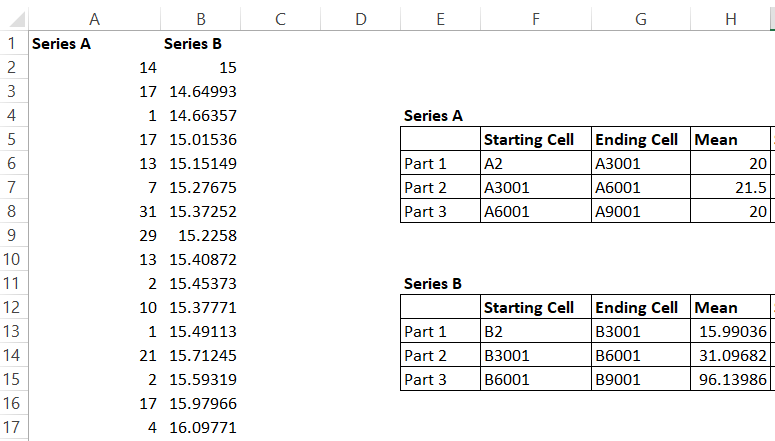 Now as you can see, the mean for Series B swings quite wildly and thereby not satisfying the first condition for stationarity.

Condition 2 -The standard deviation should be within a range.

I’m following the same approach here – I will go ahead and calculate the standard deviation for all the three parts for both the series and observe the values.

Here is the result obtained for Series A –

The standard deviation oscillates between 14-19%, which is quite ‘tight’ and therefore qualifies the 2nd stationarity condition.

Here is how the standard deviation works out for Series B –

Notice the difference? The range of standard deviation for Series B is quite random. Series B is clearly not a stationary series. However, Series A looks stationary at this point. However, we still need to evaluate the last condition i.e the autocorrelation bit, let us go ahead and do that.

Condition 3 – There should be no autocorrelation within the series

In layman words, autocorrelation is a phenomenon where any value in the time series is not really dependent on any other value before it.

For example, have a look at the snapshot below – 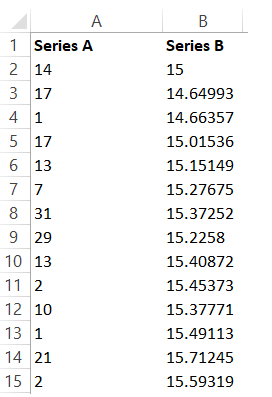 The 9th value in Series A is 29, and if there is no autocorrelation in this series, the value 29 is not really dependent on any values before it i.e the values from cell 2 to cell 8.

But the question is how do we establish this?

Well, there is a technique for this.

I can do this for 2 lag as well – i.e between Cell 1 to Cell 8, and then between Cell 3 to Cell 10, again, the correlation should be close to 0. If this is true, then it is safe to assume assumed that the series is not autocorrelated, and hence the 3rd condition for stationarity is proved.

I’ve calculated 2 lag correlation for Series A, and here is how it looks –

Let’s do this for Series B as well.

I’ve taken a similar approach, and the correlation as you can see is quite close to 1.

So, as you can see all the conditions for stationarity is met for Series A – which means the time series is stationary. While Series B is not.

I know that I’ve taken a rather unconventional approach to explaining stationarity and co-integration. After all, no statistical explanation is complete without those scary looking formulas. But this is a deliberate approach and I thought this would be the best possible way to discuss these topics, as eventually, our goal is to learn how to pair trade efficiently and not really deep dive into statistics.

Anyway, you could be thinking if it is really required for you to do all of the above to figure out if the time series (residuals) are indeed stationary. Well, like I said before, this is not required.

We only need to look at the results of something called as the ‘The ADF Test’, to establish if the time series is stationary or not.

The augmented Dickey-Fuller or the ADF test is perhaps one of the best techniques to test for the stationarity of a time series. Remember, in our case, the time series in consideration is the residuals series.

To consider a time series stationary, the P value should be as low as 0.05 (5%) or lower. This essentially means the probability of the time series is stationary is as high as 95% (or higher).

Alright, so how do you run an ADF test?

If you are a programmer, I’ve been told that there are Python plugins easily available to run an ADF test, so you could try that.

But if you are a non-programmer like me, then you will be stuck at this stage. So here is what I will do, once in a weak or 15 days, I will try and upload a ‘Pair Data’ sheet, which will contain the following information of the best possible combination of pairs, this includes –

The look back period for generating this is 200 trading days. I’ve restricted this just to banking stocks, but hopefully, I can include more sectors going forward. To help you understand this better, here is the snapshot of the latest Pair Datasheet for banking stocks – 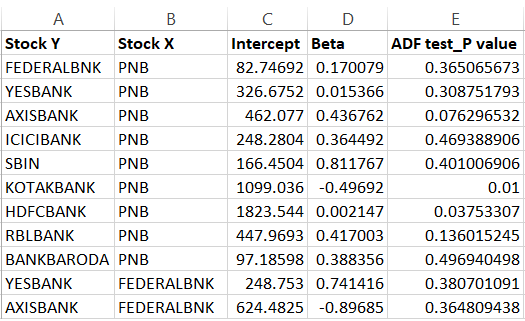 Once the order has been figured out (as in which one is Y and which one is X), the intercept and Beta for the combination has also been calculated. Finally, the ADF was conducted and the P value was calculated. If you see, the P value for Federal Bank as Y and PNB as X is 0.365.

In other words, this is not a combination you should be dealing with as the probability of the residuals being stationary is only 63.5%.

The p values don’t usually change overnight. Hence, for this reason, I check for p-value once in 15 or 20 days and try and update them here.

I think we have learned quite a bit in this chapter. A lot of information discussed here could be new for most of the readers. For this reason, I will summarize all the things you should know about Pair trading at this point –

If you are not clear on any of the points above, then I’d suggest you give this another shot and start reading from Chapter 7.

In the next chapter, we will try and take up an example of a pair trade and understand its dynamics.

You can download the Pair Data sheet, updated on 11th April 2018.

Lastly, this module (and this chapter, in particular) could not have been possible without the inputs from my good friend and an old partner, Prakash Lekkala. So I guess, we all need to thank him 🙂

Key takeaways from this chapter –