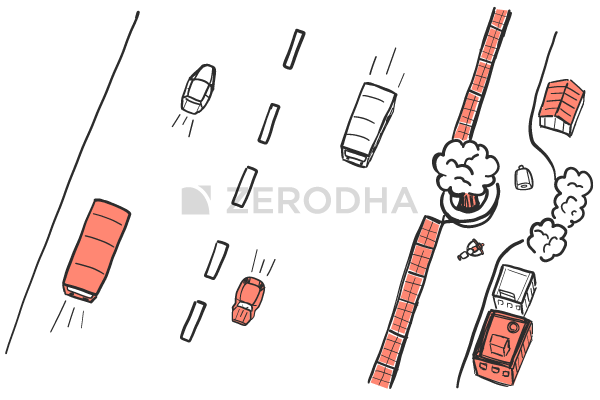 The road gets built this way, and people start using it. What do you make of it?

I know this is a weird analogy, but if you can somehow imagine this highway, service road, and that tree, and the parallel relationship between them, then you will (hopefully) understand the underlying philosophy of pair trading.

So let me attempt to do that.

Now, just like the two roads (or entities as we defined them) i.e the highway and service road – think about two companies which are similar, let’s say – HDFC Bank and ICICI Bank.

By the way, if you pick up any classic book on Pair Trading, you will come across the example of Coca-Cola and Pepsi. Since they are not listed in India, let’s go ahead with ICICI and HDFC.

Given the striking similarities between the two banks, whatever change in the business environment affects one bank, the 2nd bank should be affected in the same way. For example, if RBI increases the interest rates, then both the banks would be affected the same way and likewise when the rates are lowered.

Up to this point, we can define –

Given the above inference, we can make the following conclusion –

We can generalize this –

For example, all else equal, on a given day, ICICI stock price moves up by X% then given the relationship, HDFC is also expected to move up at least y%, but for whatever reason, assume HDFC stayed flat. Then we can go ahead and claim that ICICI stock price has moved higher than expected when compared to HDFC’s stock price.

In the arbitrage world – this translates to buying the cheaper stock i.e HDFC and selling expensive one i.e ICICI.

In a nutshell, this is the essence of ‘Pair Trading’.

Hang on a second – what about the tree on the service road and its relevance to the whole narration? Well, remember the tree caused the anomaly in an otherwise perfect ‘parallel’ relationship between the two roads?

An anomaly in stock prices gives us an opportunity to trade. The anomaly can happen because of anything –

Generally speaking, a price anomaly is a local event, which causes the stock price of one company reacts (or overreacts) compared to the other. I prefer to call it a local event because it affects only 1 company in our universe of two stocks J

So the relationship essentially sets the rules on how the two stock prices are related. Therefore, the bulk of the work in pair trading revolves around –

There are multiple ways to define these relationships between two stocks. However, the two popular techniques are based on–

Before we close this chapter – a quick note on the history of Pair trading.

The first pair trade was executed by Morgan Stanley in the early 80’s by a trader named Gerry Bamberger. Apparently, Gerry discovered the technique and kept it ‘proprietary’ for the longest time, until another trader called Nunzio Tartaglia, again from Morgan Stanley, popularized it.

Nunzio, at that time, had a huge following, considering he was one of the pioneers in ‘Quant trading’ on Wall Street. In fact, he led Morgan Stanley’s prop trading desk in the 80’s.

DE Shaw, the famed Hedge Fund, adopted this strategy in its initial days.

As you may have guessed, pair trading requires you to buy and sell two stock/assets/indices simultaneously. Many familiar with this believe that pair trading is a market neutral strategy. Market neutral, because you are both long and short at the same time. This is grossly wrong, simply because you are essentially long and short on two different stocks.

Hence, please do not be under the impression that pair trading in market neutral. This is a trading strategy that seeks to take advantage of price differentials between two, related assets.

By simultaneously buying and selling the two assets, we are trying to profit from the “relative value” of the two securities. For this reason, I’d like to refer to Pair trading as ‘Relative Value trading’.

If you think about this, in its pure sense, this is an arbitrage opportunity – we buy the undervalued security and sell the overvalued security. For this reason, some even call this the Statistical Arbitrage.

The measurement of ‘undervalued’ and ‘overvalued’ is always with respect to the one another – and the measurement technique is what we will start learning next chapter onwards.