So this brings us to where we are at this stage. In this chapter, we will go ahead and discuss the density curve and the eventual trigger to pair trade.

We have come to a stage where we need to stick to one of the variables amongst Spread, Differential, and Ratio. Why just and why not all, you may ask?

Well, this is to ensure that we are sticking to a regime and not really getting confused with conflicting signals. The reason I’ve introduced all three variables is to showcase that there are three different possibilities. It is up to you as a trader to choose the variable that you are most comfortable with. For example, I personally prefer the ratio over the differential or spread. This is because the ratio kind of captures the market valuation of the stocks since it considers the latest stock price. Besides the ratio also gives us a quick sense of how much of Stock 1 should be bought or sold with respect to stock 2.

This implies for every 1 share of Stock 1, 2.375 shares of Stock 2 has to be transacted.  We will get to the finer details later, but for now, hope you get the drift.

You are of course, free to choose any of the variable – spread, differential, or ratio. However, for the sake of this discussion, I will go ahead with the ratio.

As you may have guessed, the decision to buy or sell a pair is dependent on the variable that you track and the variable itself could be the spread, differential, or ratio. For the purpose of this discussion, we are going ahead with the Ratio. 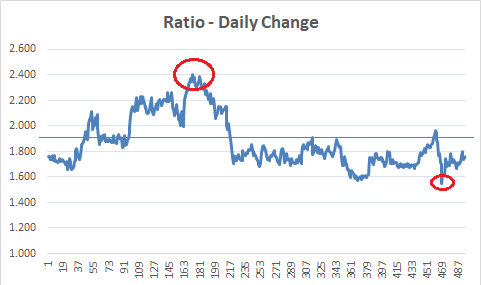 I want you to pause here and think about this. This is the tipping point in Pair trading, if you can understand everything we have discussed up to now, then the rest is a cakewalk.

The ratio itself is a variable which is derived by dividing stock 1 over stock 2. The ratio changes every day since the stock prices change every day. If you plot the chart of the daily change in the ratio you will notice that the ratio has an average (mean) value and the ratio trades above and below the mean value. Irrespective of where the ratio is today (i.e either above or below the mean) – there is a great chance that ratio will come back to mean over the next few days. Notice, I use the word ‘great chance’, here. This means, that we should be able to quantify the probability of the ratio reverting to mean.

In fact, this phenomenon is referred to as ‘Mean reversion’ or reversion to mean.

Now, if you look at it in another way – we now seem to have an opinion on the direction in which the ratio is likely will move. For example, the first circle where the ratio has moved above the average indicates that the ratio is likely to retrace back to mean.  Or in other words, you can short the ratio at the high point and buy it back around the mean. Likewise, the second circle points to an opportunity where one can buy the ratio, with an expectation that the ratio will move back to the average value.

I hope you are getting the point here.

The ratio’s value with respect to the mean acts as a key trigger to initiate the trade. If the ratio is –

Alright – so far so good. Here are few questions though –

The answers to these questions lie in something called as the ‘Density Curve’. Let’s figure that out. 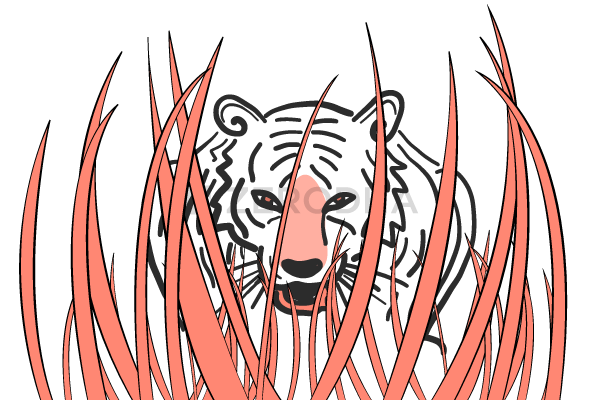 To put the point across – this is pretty much like a tiger waiting in the ambush to hunt down a prey. Just because the prey is in the open, the tiger will not jump and ruin its chances of a kill. It will attack only when it is convinced that the effort will lead to a kill.

So how do we stay in the ambush and wait for our chance for the kill?

So here is what this means with respect to the ratio –

This can be achieved by tracking the ‘Density Curve’ of the ratio. The density curve is a non-negative value which lies anywhere between 0 and 1. I’d suggest you watch this video on Khan Academy to learn more about Density Curve.

Calculating the density curve on excel is quite straightforward. Here is how you can do this, have a look at the image below – You can use the inbuilt excel function called Norm.dist for this. The function requires 4 inputs –

I’ve calculated the density curve value for all variables, here is how the table looks –

I guess we could break this chapter at this point. In the next chapter, we will look into details on how we can use the density curve to trigger long and short pair trade.