Let’s start this chapter with a flashback. For many of us, when we think of the 70’s, we can mostly relate to all the great rock and roll music being produced from across the globe. However, the economists and bankers saw the 70’s very differently.

The global energy crisis of 70’s had drawn the United States of America into an economic depression of sorts. This lead to a high inflationary environment in the United States followed by elevated levels of unemployment (perhaps why many took to music and produced great music 🙂  ). It was only towards the late 70’s that things started to improve again and the economy started to look up. The Unites States did the right things and took the right steps to ease the economy, and as a result starting late seventies / early eighties the economy of United States was back on track. Naturally, as the economy flourished, so did the stock markets.

Markets rallied continuously starting from the early 1980s all the way to mid-1987. Traders describe this as one of the dream bull runs in the United Sates. Dow made an all-time high of 2,722 during August 1987. This was roughly a 44% return over 1986.   However, around the same time, there were again signs of a stagnating economy. In economic parlance, this is referred to as ‘soft landing’ of the economy, where the economy kind of takes a breather. Post-August 1987’s peak, the market started to take a breather. The months of Aug, Sept, Oct 1987, saw an unprecedented amount of mixed emotions. At every small correction, new leveraged long positions were taken. At the same time, there was a great deal of unwinding of positions as well. Naturally, the markets neither rallied nor corrected.

While this was panning on the domestic front, trouble was brewing offshore with Iran bombing American super tankers stationed near Kuwait’s oil port. The month of October 1987, was one of its kind in the history of financial markets. I find the sequence of events which occurred during the 2nd week of October 1987 extremely intriguing, there were way too much drama and horror panning out across the globe –

The financial world had not witnessed such dramatic turn of events. This was perhaps the very first few ‘Black Swan’ events to hit word hard. When the dust settled, a new breed of traders occupied Wall Street, they called themselves, “The Quants”. 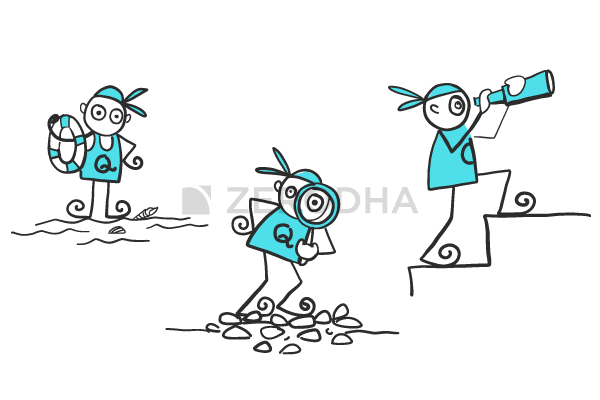 The dramatic chain of events of October 1987 had multiple repercussion across the financial markets. Financial regulators were even more concerned about system wide shocks and firm’s capability to assess risk.  Financial firms were evaluating the probability of a ‘firm-wide survival’ if things of such catastrophic magnitude were to shake up the financial system once again. After all, the theory suggested that ‘October 1987’ had a very slim chance to occur, but it did.

It is very typical for financial firms to take up speculative trading positions across geographies, across varied counterparties, across varied assets and structured assets. Naturally, assessing risk at such level gets nothing short of a nightmarish task. However, this was exactly what the business required. They needed to know how much they would stand to lose, if October 1987 were to repeat. The new breed of traders and risk mangers calling themselves ‘Quants’, developed highly sophisticated mathematical models to monitor positions and evaluate risk level on a real-time basis. These folks came in with doctorates from different backgrounds – statisticians, physicist, mathematicians, and of course traditional finance. Firms officially recognized ‘Risk management’ as an important layer in the system, and risk management teams were inducted in the ‘middle office’ segment, across the banks and trading firms on Wall Street. They were all working towards the common cause of assessing risk.

Then CEO of JP Morgan Mr.Dennis Weatherstone, commissioned the famous ‘4:15 PM’ report. A one-page report which gave him a good sense of the combined risk at the firm-wide level. This report was expected at his desk every day 4:15 PM, just 15 minutes past market close. The report became so popular (and essential) that JP Morgan published the methodology and started providing the necessary underlying parameters to other banks. Eventually, JP Morgan, spun off this team and created an independent company, which goes by the name ‘The Risk Metrics Group’, which was later acquired by the MSCI group.

The report essentially contained what is called as the ‘Value at Risk’ (VaR), a metric which gives you a sense of the worst case loss, if the most unimaginable were to occur tomorrow morning.

The focus of this chapter is just that. We will discuss Value at Risk, for your portfolio.

At the core of Value at Risk (VaR) approach, lies the concept of normal distribution. We have touched upon this topic several times across multiple modules in Varsity. For this reason, I will not get into explaining normal distribution at this stage. I’ll just assume you know what we are talking about. The Value at Risk concept that we are about to discuss is a ‘quick and dirty’ approach to estimating the portfolio VaR. I’ve been using this for a few years now, and trust me it just works fine for a simple ”buy and hold’ equity portfolio.

Portfolio VaR helps us identify this. The steps involved in calculating portfolio VaR are very simple, and is as stated below –

Of course, for better understanding, let us apply this to the portfolio we have been dealing with so far and calculate its Value at Risk.

In this section, we will concentrate on the first two steps (as listed above) involved in calculating the portfolio VaR. The first two steps involve us to identify the distribution of the portfolio returns. For this, we need to deal with either the normalized returns or the direct portfolio returns. Do recall, we have already calculated the normalized returns when we discussed the ‘equity curve’. I’m just using the same here – 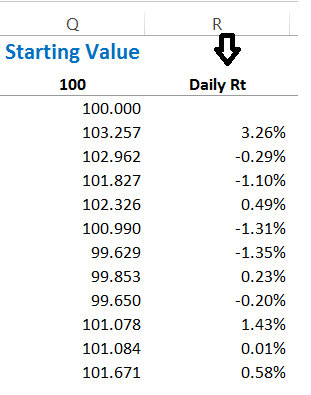 You can find these returns in the sheet titled ‘EQ Curve’. I’ve copied these portfolio returns onto a separate sheet to calculate the Value at Risk for the portfolio. At this stage, the new sheet looks like this – 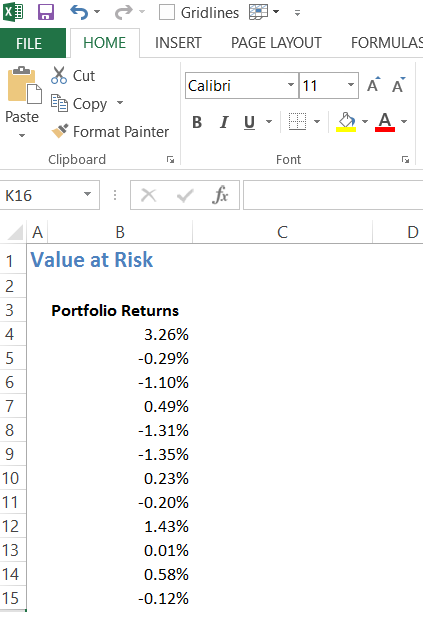 Remember, our agenda at this stage is to find out what kind of distribution the portfolio returns fall under. To do this, we do the following –

Step 1 – From the given time series (of portfolio returns) calculate the maximum and minimum return. To do this, we can use the ‘=Max()’ and ‘=Min()’ function on excel. 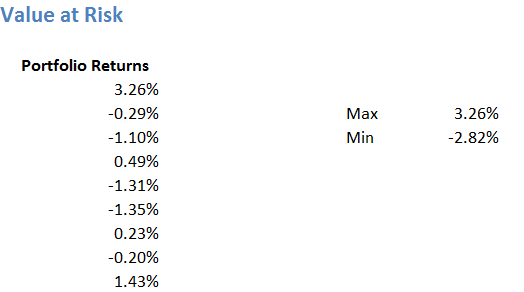 There are 126 data points, please do remember we are dealing with just last six months data for now. Ideally speaking, you should be running this exercise on at least 1 year of data. But as of now, the idea is just to push the concept across.

We now have to create ‘bin array’ under which we can place the frequency of returns. The frequency of returns helps up understand the number of occurrence of a particular return. In simple terms, it helps us answer ‘how many times a return of say 0.5% has occurred over the last 126 day?’. To do this, we first calculate the bin width as follows –

I’ve selected 25 based on the number of observations we have.

This is quite simple – we start form the lowest return and increment this with the bin width. For example, lowest return is -2.82, so the next cell would contain

We keep incrementing this until we hit the maximum return of 3.26%. Here is how the table looks at this stage – 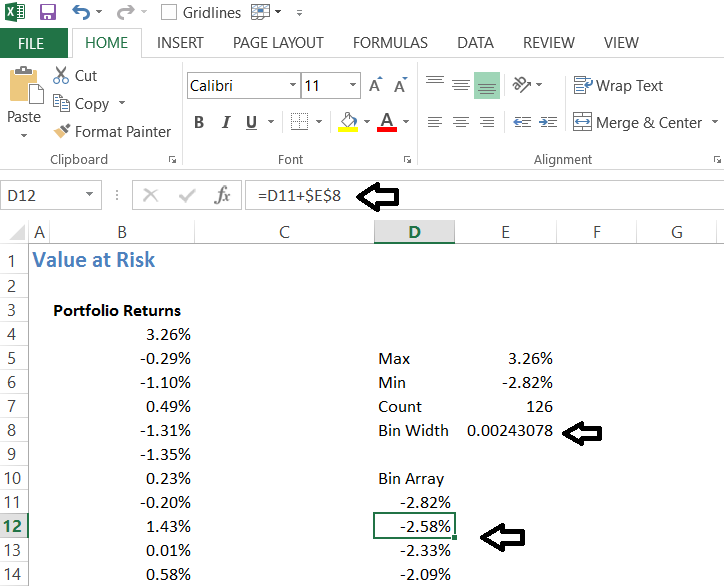 We now have to calculate the frequency of these return occurring within the bin array. Let me just present the data first and then explain what is going on –

To calculate the frequency, we simply have to select all the cells next to Bin array, without deselecting, type =frequency in the formula bar and give the necessary inputs. Here is the image of how this part appears – 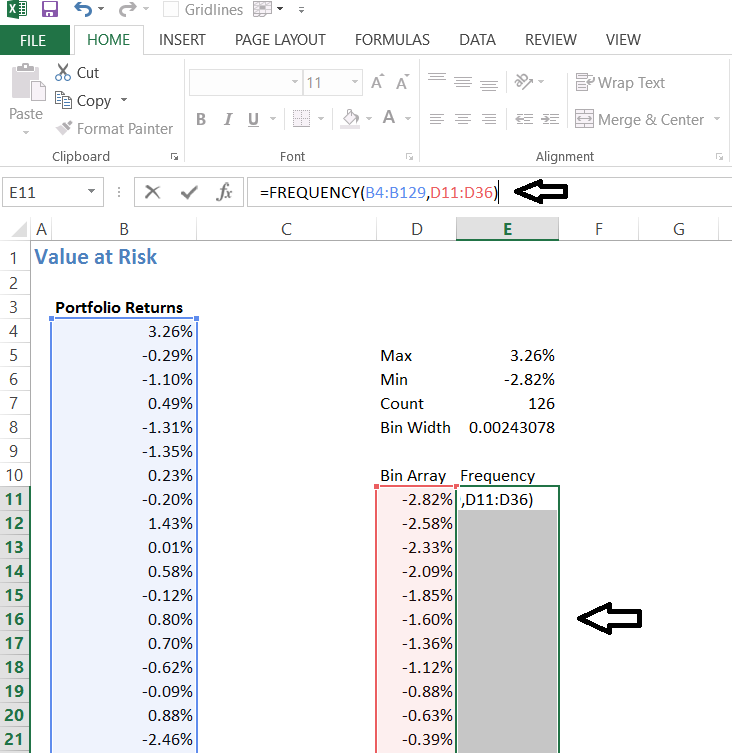 Do remember to hit ‘Ctrl + shift + enter’ simultaneously and not just enter. Upon doing this, you will generate the frequency of the returns.

To plot the distribution, I simply have to select the all the frequency data and opt for a bar chart. Here is how it looks – 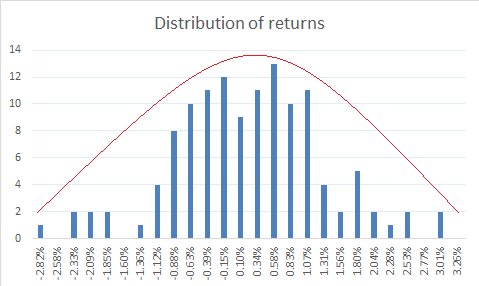 Clearly what we see above is a bell-shaped curve, hence it is quite reasonable to assume that the portfolio returns are normally distributed.

Now that we have established that the returns are normally distributed, we proceed to calculate the Value at Risk. From here on, the process is quite straightforward. To do this, we have to reorganize the portfolio returns from the ascending to descending order. 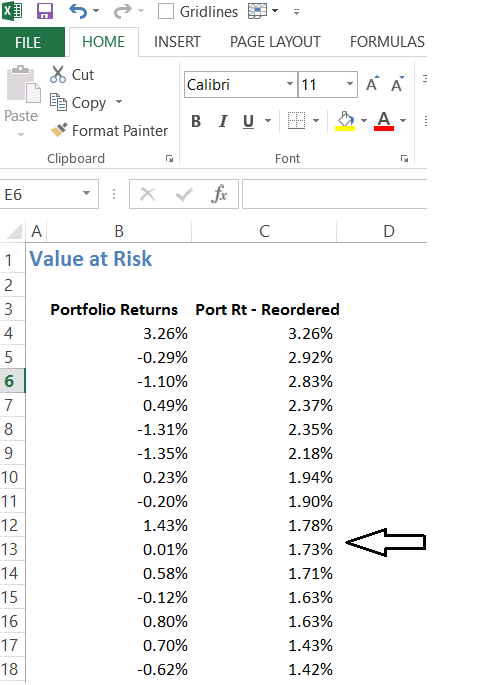 I’ve used excels sort function to do this. At this stage, I will go ahead and calculate Portfolio VaR and Portfolio CVaR. I will shortly explain, the logic behind this calculation.

You may have many questions at this stage, let me list them down here along with the answers –

I hope the above discussion makes sense, do apply this on your equity portfolio and I’m sure you will gain a greater insight into how your portfolio is positioned.