Last chapter we looked at three important position sizing techniques, all of them were unique in their own merit. The three techniques were –

Before I proceed, I thought it is important to discuss another practical position sizing technique, called the ‘Percentage Risk’, method. I do know quite a few traders who use this and I myself find this quite simple and intuitive technique to use. The percentage risk method, relies upon your own assessment of ‘loss’ that you are willing to bear for a given trade. This, as you may know is also called the ‘Stop loss’ for the trade. The stop loss for a trade is the price at which you decide to close the trade and take a hit. The percentage risk technique controls the position size as a function of risk defined by stop loss.

Let me take the example of a stock futures and explain how this works, in fact, I think this is a good trade setup  – 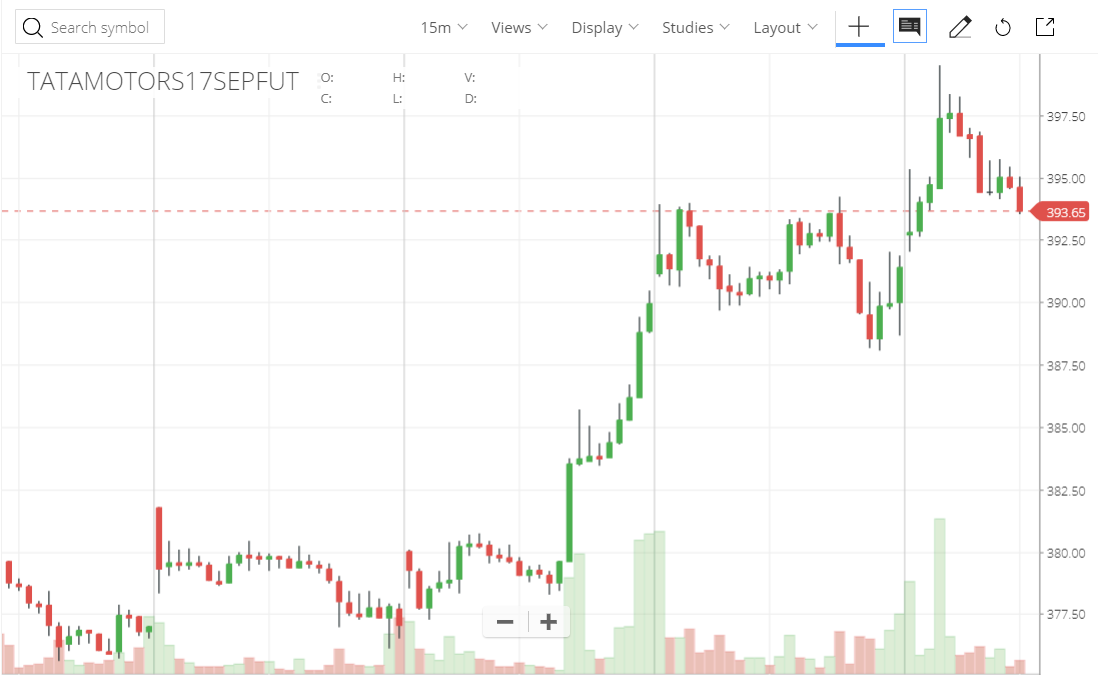 Let me explain why this is a trade worth considering –

Tata Motors is at 393.65, which happens to be a price action zone, considering it tested the same level, twice in the past. So this makes 393.65, a support price for Tata Motors (on an intraday basis). Both the times in the past, the price declined of Tata Motors declined when the stock tested 393.65. Given this, there is a possibility that the price could again test 393.65 and react to bounce back to the price from which it started to decline i.e 400.

Also, do notice the low volume retracement between 400 to 393.65 – I’ve discussed why I like trades like these in the Technical Analysis module. If you’ve not read that module, maybe you should ☺

Considering these factors, a trader could be inclined to go long on Tata Motors Futures at 393.65.

What if the trade heads the other direction? What is the stop loss?

I notice some sort of support at 390/-, hence I’d be happy to set this as stop loss for the trade.

Nothing complicated, as you can see this is a very straightforward setup.

So the trade would be –

Reward to Risk: 1.7 (which is great for an intraday trade)

Technically speaking one can buy up to 6.8 or 6 lots –

In other words, you would lose –

However great a trade set up is, it is not a smart thing to expose so much capital to risk. As a thumb rule, professional traders do not risk more than 1 to 3% of their capital on any single trade, and this rule forms the core of the ‘Percentage risk’ position sizing technique.

Given this, let us define the maximum risk per trade as a percentage of overall capital – maybe 1.5% for now. This means on this trade, the maximum loss I’m willing to bear is

In other words, I don’t intend to lose more than Rs.7,500/- on any single trade. This is the maximum loss threshold.

The loss per lot is –

In the event the stop loss is triggered I would be taking a hit of Rs.5475 per lot.

Now to identify the number of lots I could take for the risk I’m willing to bear, I simply have to divide the maximum threshold by the loss per trade.

For the next trade, it is prudent (or rather conservative in a positive way) to reduce the money blocked from the overall capital and re-work the maximum loss threshold. Let’s do that and identify the new max loss threshold –

Given this, for the next trade, I will work out the stop loss, multiply that with the lot size and divide the max risk i.e 6397.5 by loss threshold to identify how many lots I can transact in.

So on and so forth!

By the way, curious to know how the trade panned out? Here you go –

I like trades like these, when the price does not even approach close to the stop loss J. As I had pointed out earlier, I did have a great amount of conviction on this trade. This leads me to the next topic – how do I position size when my conviction on a particular trade is high? What in such situations I want to expose a slightly higher capital?

Kelly’ Criterion has an interesting background. It was proposed by John Kelly in the 50’s who at that point was working for AT&T’s Bell Laboratories. He in fact, suggested the Kelly’s Criterion to help the telecom company with long distance telephone noise issues. However, the same theory was adopted by professional gamblers to identify the optimal bet size. This soon found its way to the stock markets as well, and there are many professional traders and investors who use Kelly’s Criterion for bet sizing. Perhaps, this is one of those very few tools that both traders and investors commonly use.

I still don’t know how the transition from Telecom to stock markets happened – I’m a Telecom Engineer by qualification (although I know nothing about Telecommunications now) and I’ve been involved in Stock markets for over 13+ years….but I just can’t wrap my head around how Kelly’s Criterion made its transition across these two different worlds J

Anyway, the Kelly’s Criterion essentially helps us estimate the optimal bet size (or the fraction of our trading capital) considering –

To understand this better, let’s take up an example. Assume I have a trading system which has produced the following results, for sake of simplicity, let’s assume this is a trading system to trade just one stock, Tata Motors.

Given the above data –

Do note, a number greater than 1 is always desirable as it indicates that your average gains are higher than your average loss.

Lets plug these numbers back to the Kelly’s Criterion equation –

As per the original school of thought – Kelly’s percentage is a direct representation of how much capital one should expose for a trade. For example, for the 11th trade on Tata Motors, Kelly’s Criterion suggests a capital exposure of 31%.

But I think this can be a little tricky, imagine a trading system with great accuracy – the Kelly;s Percentage can turn out to be 70%, suggesting a capital exposure of 70% to the next trade. Not a very smart thing to do if you ask me. However, you may ask why not? After all a system with 70% accuracy is a great, so why not maximize the bet?

Given this, here is a simple modification to Kelly’s criterion. Let us go back to the percentage risk position sizing technique we discussed earlier in the chapter.

What does this mean? This means for a given trade, I would not expose more than 5% of the capital. This also means that capital exposed could range from as low as 0.1% to all the way up to 5%. So how do I decide?

So higher the Kelly’s percentage, higher is the capital exposed and vice versa.

For a more Mathematical explanation on Kelly’s Criterion, I’d suggest you watch this video, if not for anything, watch from the 10th minute onward.

With this, I’d like to close the discussion on position sizing, hopefully the last 4 chapters has given you a fair understanding of the importance of position sizing and techniques to position size your bets.

Onwards to ‘Trading and Investing Biases’.