Back in the day, I traded stocks with ICICI Direct. Around the same time, MCX had just started operations, and ICICI was one of the first brokers to get a membership.  MCX was aggressively campaigning and were conducting workshops and seminars to educate market participants, hoping to get more activity on the exchange. I was in the discovery phase, curious to know about everything tradable in India. I attended some of these sessions and, for some reason, believed I would be far more efficient trading an alternate asset like commodities as opposed to trading equities.

I was quite excited to start trading commodities. I quickly showed up at my broker’s office with all the necessary documents to open my commodities trading account. To my surprise, I was one of their earliest clients from Bangalore to open an account with MCX. It took about 12 days (that seemed like an eternity) to set up my account with MCX.

Finally, my broker called me to say I’m good to go live and place trades the next day. I actually took a day off from work to trade commodities! I was thrilled to put my new found commodities knowledge (although half-baked) to practice.

I chose to trade ‘Pepper futures’. Though the rationale behind this choice eludes memory, Pepper futures it was!

So, my first commodities trade was ‘Long pepper’, 10 lots (I guess it was a 1 metric tonne contract), I don’t remember the exact price, but I suppose it was somewhere around Rs.7,500/- per quintal. I had bet my entire trading account on Pepper futures!

What followed through was quite predictable. To my dismay, Pepper hit its 52-week low over the next two days, I brought in additional capital, but Pepper continued to crash, as did my account until there was nothing left in it.

Dejected, I did some post-mortem analysis to figure out what went wrong and realised the monsoons were expected to be great in Kochi, which would result in an outstanding harvest of Pepper.

Only now did I understand that one really needs to have some understanding of monsoons and harvest cycles before trading agri commodities. Unfortunately, I learnt this lesson at a very high price. No wonder I remember it to this day. J

Anyway, considering this, we will spend a little time understanding a bit of this topic, and hopefully, you will not make the same mistakes I did in the past.

And, just so you know – right after I burnt my trading account with my first commodities trade, what happened next is easy to guess – Pepper futures bottomed out and rallied nonstop to Rs.12,500/- per quintal!

The Indian economy’s dependence on agriculture has reduced over the years. A few decades ago, agriculture contributed to over 30% to our GDP, but this has now reduced to about 10%. However, agriculture and allied services are still the largest employers in India. This perhaps explains why the Central Government most often takes a populist stance when it comes to reforms and policies in this sector.

Have a look at the snapshot below; this gives you an idea of which sector contributes how much to the Indian economy –

But, like I just mentioned, agriculture is still the largest employer in India, and this entire industry and workforce is dependent on how the yearly rainfall pans out. This is quite natural as 2/3rd of India’s arable land is rain-fed.

There are two main rainfalls seasons (monsoons) in India –

I will not get into the technicalities of how these spells are caused, clearly not my area of expertise. However, these are the things you need to know about these two seasons –

During each of these monsoon seasons, seeds are sown and crops harvested. Based on how good or bad the monsoon is, the harvest can be estimated.

Rice and Wheat are India’s staple, contributes close to 40% of the food grain production, and hence plays a crucial role in India’s food security. Do note; they are harvested and sown in Karif and Rabi season respectively.

The progress of sowing and harvesting is continuously monitored and is reported across leading publications. Have a look at this – This one reports the progress of Rabi crops – In fact, with whatever basic knowledge we have gathered so far, I’d request you to read this news piece.

The idea is to make sure; we understand what is being discussed here and relate to the news article. If you are a serious agri trader, I’d expect you to continuously keep track of such news pieces and strategies your trades.

The following agri commodities are available to trade on MCX –

Of all these agri commodities, I’d recommend you trade Cardamom and Mentha Oil, simply because of the liquidity reasons.

Cardamom, as you may know, is mainly used in India sweets. It also has few therapeutic applications like skin and dental care – not that savouring sweets are less therapeutic. ☺

Cardamom is a Kharif crop; the demand-supply dynamics mainly depends on –

Let’s take a quick look at the contract specifications. Unlike other commodities listed on MCX, Cardamom does not have two variants. So don’t go looking for Cardamom and Cardamom mini.

The supply and demand for cardamom is kind of steady. Coincidentally, I read a news piece today related to this, and I thought it would be interesting to shares the same here – 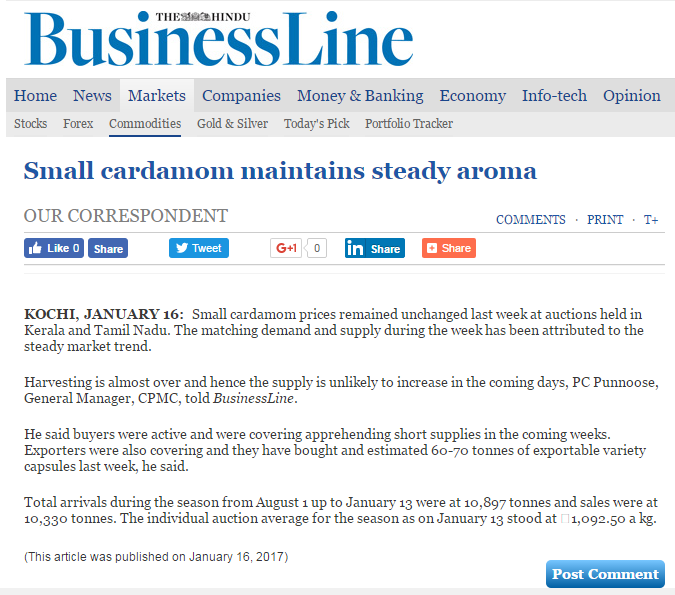 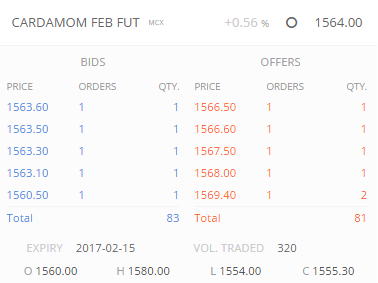 Further, as you can notice, the MIS margin for Cardamom is not available. In fact, there is no MIS margin for any agri commodities. There is a reason for this – agri commodities are quite volatile, and they tend to hit the circuit limits frequently, and therefore unwinding the position by the end of the day would not easy. For this reason, a trader is better off trading NRML for intraday as well.

Here is the contract introduction table of Cardamom – 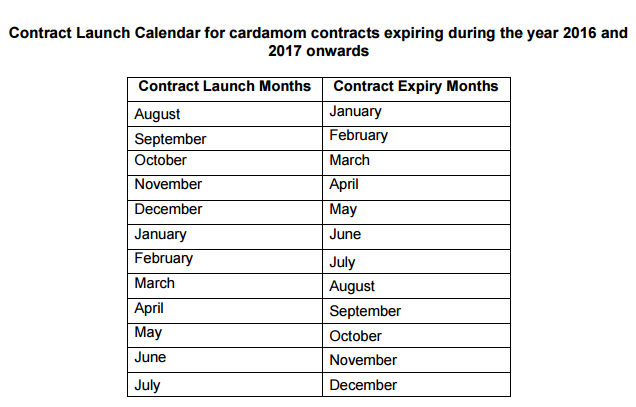 As you can see, every month, a six-month futures contract is introduced. For example, in January, June futures are introduced. Hence, June futures will continue to stay in the system till the 15th of June (remember, expiry is on 15th of every month). For all practical purposes, it makes sense always to trade the current month contract for liquidity.

Mentha is an aromatic herb which is used in its raw form for Indian cooking.  Besides, it distilled and filtered to produce the Mentha oil. It is Mentha Oil. It is traded on MCX. Mentha oil is used in food, pharmaceutical, perfumery, and flavouring industry.

Mentha oil is also imported to countries such as the US, China, and Singapore. This clearly indicates that Mentha Oil contract is sensitive to fluctuations in USD-INR rates. Besides this, other factors such as rainfall, insect attack, and crop acreage also exert its influence on the contract.

The contact specs for Mentha Oil are as below –

Of all the things listed in India, probably Mentha Oil is the only asset which has Rs.36/- P&L per tick ☺

Here is the snap quote of the Mentha Oil, expiring 2017 – As you can see, the NRML (for overnight positions) margin is Rs. 29,893/-. This makes it about 8.5% margin for NRML orders. For reasons mentioned earlier, there is no MIS margin for Mentha Oil as well.

The contracts are introduced every month, 5 months forward. As usual, I’d suggest you stick to the current month contract to trade.