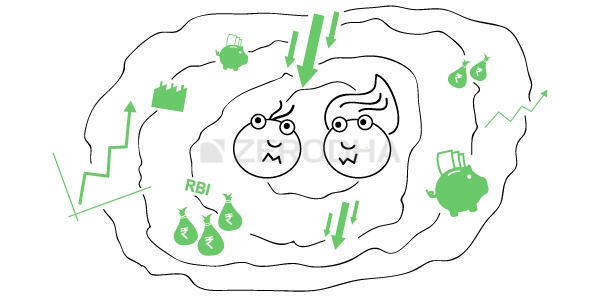 For a market participant transacting just based on company-specific information may not be sufficient. It is also important to understand the events that influence the markets. Various outside factors, economic and/or non-economic events have a key impact on stocks and markets’ performance in general.

In this chapter, we will try to understand some of these events, and also how the stock market reacts to them.

On the other hand, when the interest rates are low, borrowing becomes easier. This translates to more money in the hands of corporations and consumers. With more money, there is increased spending which means the sellers tend to increase prices leading to inflation.

To strike a balance, the RBI has to consider all the factors and carefully set a few key rates. Any imbalance in these rates can lead to economic chaos. The key RBI rates that you need to track are as follows:

Repo Rate – Whenever banks want to borrow money, they can borrow from the RBI. The rate at which RBI lends money to other banks is called the repo rate. If the repo rate is high, that means the cost of borrowing is high, leading to slow growth in the economy. Currently, the repo rate in India is 8%. Markets don’t like the RBI increasing the repo rates.

Cash reserve ratio (CRR) – Every bank is mandatorily required to maintain funds with RBI. The amount that they maintain is dependent on the CRR. If CRR increases, then more money is removed from the system, which is not good for the economy.

The RBI meets every two months to review the rates. This is a key event that the market watches out for. The first to react to rate decisions would be interest-rate sensitive stocks across various sectors such as – banks, automobile, housing finance, real estate, metals, etc.

Inflation is a sustained increase in the general prices of goods and services. Increasing inflation erodes the purchasing power of money. All things being equal, if the cost of 1 KG of onion has increased from Rs.15 to Rs.20, then this price increase is attributed to inflation. Inflation is inevitable, but a high inflation rate is not desirable as it could lead to economic uneasiness. A high level of inflation tends to send a bad signal to markets. Governments work towards cutting down the inflation to a manageable level. Inflation is generally measured using an index. If the index is going up by certain percentage points, it indicates rising inflation, likewise index falling indicates inflation cooling off.

Wholesale Price Index (WPI) – The WPI indicates the movement in prices at the wholesale level. It captures the price increase or decreases when they are sold between organizations as opposed to actual consumers. WPI is an easy and convenient method to calculate inflation. However, the inflation measured here is at an institutional level and does not necessarily capture the consumer’s inflation.

Consumer Price Index (CPI)– The CPI, on the other hand, captures the effect of the change in prices at a retail level. As a consumer, CPI inflation is what really matters. The calculation of CPI is quite detailed as it involves classifying consumption into various categories and subcategories across urban and rural regions. Each of these categories is made into an index. This means the final CPI index is a composition of several internal indices.

The computation of CPI is quite rigorous and detailed. It is one of the most critical metrics for studying the economy.  A national statistical agency called the Ministry of Statistics and Programme Implementation (MOSPI) publishes the CPI numbers around the 2nd week of every month.

The Index of Industrial Production (IIP)  is a short-term indicator of how the country’s industrial sector is progressing. The data is released every month (along with inflation data) by the Ministry of Statistics and Programme Implementation (MOSPI). As the name suggests, the IIP measures the Indian industrial sectors’ production, keeping a fixed reference point. As of today, India uses the reference point of 2004-05. The reference point is also called the base year.

To sum up, an upswing in industrial production is good for the economy, and a downswing rings an alarm. As India is getting more industrialized, the relative importance of the Index of Industrial Production is increasing.

A lower IIP number puts pressure on the RBI to lower the interest rates. The following graph shows the change in IIP in percentage terms for the last 1 year.

The Purchasing managers’ index (PMI) is an economic indicator that tries to capture business activity across the country’s manufacturing and service sectors. This is a survey-based indicator where the respondents – usually the purchasing managers- indicate their business perception change concerning the previous month. A separate survey is conducted for the service and the manufacturing sectors. The data from the survey are consolidated on a single index. Typical areas covered in the survey include new orders, output, business expectations, and employment.

A Budget is an event during which the Ministry of Finance discusses the country’s finance in detail. The Finance Minister, on behalf of the ministry, makes a budget presentation to the entire country. During the budget, major policy announcements and economic reforms are announced, which impacts various industries across the markets. Therefore the budget plays a vital role in the economy

As a reaction to the budget announcement, ITC traded 3.5% lower for this precise reason.

A budget is an annual event, and it is announced during the last week of February. However, under certain special circumstances such as a new government formation, the budget announcement could be delayed.

This is perhaps one of the important events to which the stocks react. The listed companies (trading on the stock exchange) must declare their earning numbers once in every quarter, also called the quarterly earnings numbers. During an earnings announcement, the corporate gives out details on various operational activities, including:

Besides some companies give an overview of what they expect from the upcoming quarters. This forecast is called ‘corporate guidance’.

Invariably every quarter, the first blue-chip company to make the quarterly announcement is Infosys Limited. They also give out guidance regularly. Market participants keenly follow what Infosys has to say in terms of guidance as it has an overall impact on the markets.

The table below gives you an overview of the earning season in India:

If the street expectation and actual numbers match, the stock price tends to trade flat with a negative bias more often than not. This is mainly because the company could not give any positive surprises.