While some people have little faith in their insurers, others have an almost unshakable belief in the might of a top insurance company. They are convinced that the insurer will come good during the crisis — That they will pay your bills no matter what. But once again, this is only partly true. And it’s not entirely because insurance companies are backstabbing, money-grabbing con artists. Instead, it’s because their model is open to abuse. 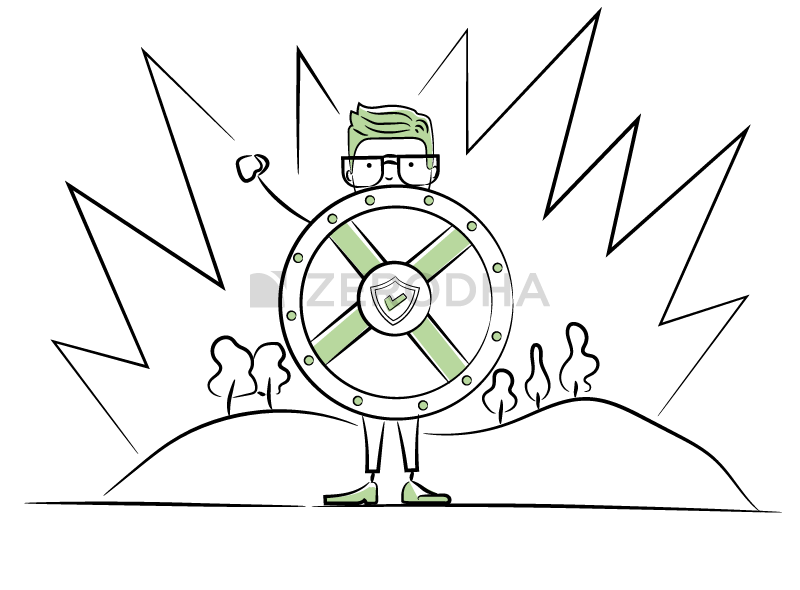 Consider, for instance, if you’re diagnosed with a cataract. It’s early days, but your doctor recommends getting surgery in the next year or so. And since you have time on your side, you decide to offset all future medical expenses by getting yourself a health insurance policy.

It seems like a decent plan — To have the insurer pay the bill at the time of hospitalisation. And even though you’ll be spending a sizeable premium during this time, you can take comfort in the fact that this sum pales in comparison to the actual cost of surgery, which can often be upwards of Rs. 50,000. So, it’s a win-win for you, no matter how you view this.

So how does the insurance company protect themselves from exigencies like these? Can they rely on medical records alone to evaluate whether you’ve been honest with your declaration?

Well, no. Because they don’t have to, health insurance providers have another line of defence . They impose a separate waiting period for a list of illnesses where patients may have the luxury of delaying treatments. Think Cataracts, stones, surgery to fix a deviated nasal septum — that stuff. During this waiting period (2 years on most occasions), you won’t be able to claim if you were diagnosed with an illness on this list.

Looking at the sample list of diseases (provided below), you may think that insurers hardly cover anything during the first two years. People routinely complain about the lack of coverage they receive despite paying the premium in total, and it’s a pattern we see repeatedly — once we tell them such a list exists. 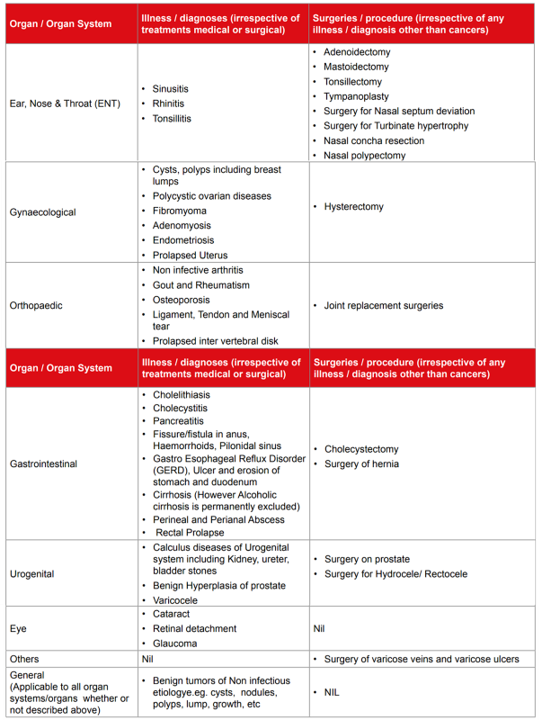 However, this line of reasoning isn’t very accurate either. Granted, the list may look prohibitive to somebody who isn’t intimately familiar with the medical profession. Still, it only includes a fraction of ailments that you encounter daily. Dengue, Malaria, a broken bone, cancer (in many cases), and heart conditions are covered after the first 30 days. They’re not part of this “specific illness” list.

And so you’ll get comprehensive coverage on more occasions than one. You’re genuinely vulnerable only after you’ve bought the policy. For the first 30 days, insurers won’t cover anything outside accidental hospitalisations. The precise definition of what constitutes an accident depends on the company. Still, in general, if you needed medical attention after electrocution or a horrible car accident, you could count that as an accident.

Even other insurance companies deploy another more sinister tactic to contain their liability. Alongside the specific illness list, they’ll also throw in disease-wise sub-limits.

Imagine an insurer offers you a bargain deal — ₹10 lakh cover at a premium of just ₹6,000 a year. It’s so good that nobody else can match this price. You are sceptical, and you ponder for a while. But you go ahead with the purchase anyway since he is a family friend.

And then, one day, your worst fears come true. A slipped disk forces you into the operation theatre. You require extensive treatment. The final bill is hefty—₹ 4,36,000 — inclusive of all costs. But despite your ₹10 lakh cover, the insurer tells you they can only cover ₹2,00,000. You are outraged, and you press for clarification.

At which point they break the bad news — They have a cap on the total coverage amount specifically mandated for certain diseases, aka disease-wise sub-limits.

For instance, for cardiovascular diseases — They only pay ₹2,50,000

Bottom line — You were suckered into buying a policy that barely pays anything. And while there’s no way around mitigating risks associated with specific illnesses, disease-wise sub-limits are avoidable. You have to pick a policy that doesn’t feature such a thing, and you’ll be good as gold.

But we’re only getting started here since this is just the first line of defence. The second line of defence kicks in soon after to prevent abuse of another kind — a far more severe transgression. Imagine your liver is done for — it’s beaten, scarred, and in no working condition.

Your doctor will tell you it’s a bad case of liver cirrhosis, and the only alternative right now is to get surgery or a transplant. And if you were hoping your insurance company would come through on the transplant, you’d have to double-check one thing — How’d your liver get so damaged in the first place?

In some rare cases, you could get liver cirrhosis through no fault. But that’s only on rare occasions. The likely explanation is that, in your case, cirrhosis is a direct consequence of chronic alcoholism. That your compulsive drinking habits gave way to this tragedy. And here’s the kicker — Insurance companies do not cover illnesses that precipitate as a consequence of substance abuse, drugs or even alcoholism.

And this non-coverage isn’t just specific to a certain period (as was the case with particular illnesses). Insurance companies never cover this sort of thing, ever. They even have a name for such categorisation — permanent exclusions. So in effect, there is only one way to get the insurer to pay for the transplant — Your doctor has to produce a certificate stating that your condition has nothing to do with alcoholism.

Or you have to bear the costs on your own. And permanent exclusions aren’t just limited to substance abuse. It could be extended to a wide array of use cases — ranging from those that seem pretty reasonable and others that are borderline extreme.

For instance, insurance companies are known to exclude all sorts of cosmetic treatments permanently, i.e. They won’t reimburse costs associated with fixing misaligned teeth. Still, if you accidentally broke your jaw and need surgery, they’ll pay for it.

They draw the line (in most cases) by asking a straightforward question — “Is the treatment deemed medically necessary, and does it significantly impair your quality of life?” If the answer is no, you’ll have a tough time getting the insurance company to pay up. And while this seems like a reasonable exclusion, others may seem a bit extreme. For example, insurance companies are also known to permanently exclude all treatments associated with external congenital diseases —visible  conditions present from birth.

Bottom line — You would do well to take your policy document and review all permanent exclusions before you sign off on the agreement. If you want a sample list, here’s something to get you going.

But wait, we are not done yet. The third and fourth lines of defence kick in to prevent abuse, not from customers but from hospitals. Some hospitals are notorious for overcharging customers, especially when they know the insurer bears the ultimate liability.

They throw in frivolous expenses — admission charges, administrative charges, extra charge for TV (when there’s no TV involved), monitor charge, 100 extra gloves — this sort of stuff. This is why insurers exclude non-medical expenses — often tabulated as consumables. Some companies will cover these expenses if you pay extra, but they are on the exclusion list in most cases.

Then there’s the fact that hospitals can also overcharge customers by inflating the cost of treatment itself. Now bear in mind that most hospitals don’t do this. They play fair by and large. Sure they may recommend surgery when you have other alternatives, but inflating the actual cost of treatment is a different ballgame. Because then, they’ll have to dabble with some very shady practices.

For starters, they could pursue a line of treatment that may not be appropriate simply because it’s more expensive. On other occasions, they may inflate costs associated with intangibles — consultancy charges, surgery costs and other such things- to extract a king’s ransom. But insurers have already accounted for these things.

In both cases, they will have a “get out of jail card” since the policy document states that the insurer is only obligated to pay for treatments deemed “just and reasonable.” They’re also only expected to settle claims when doctors pursue a line of treatment that is considered acceptable by the medical council of India.

Ultimately, if the hospital tries to con the insurer, they’ll walk out of it relatively unscathed, leaving you fully exposed. This is why it’s always best to get a second opinion when dealing with expensive medical procedures.

And finally, some hospitals run illegal rackets — plain and simple. They may not have the necessary documentation to run a licensed medical facility, or maybe they’re known to have conned insurance companies in the past — by inflating costs or forging records. So most insurance companies will also have a designated blacklist — a list of hospitals they won’t work with. And if you seek treatment in such a facility, they can repudiate the claim  on most occasions.

So, if you’re expecting the insurance company to come through every single time, you may need to revisit that idea. However, once you’re intimately familiar with the nuance surrounding exclusions and waiting periods, you can better navigate hospitalisations and the claims that follow soon after.