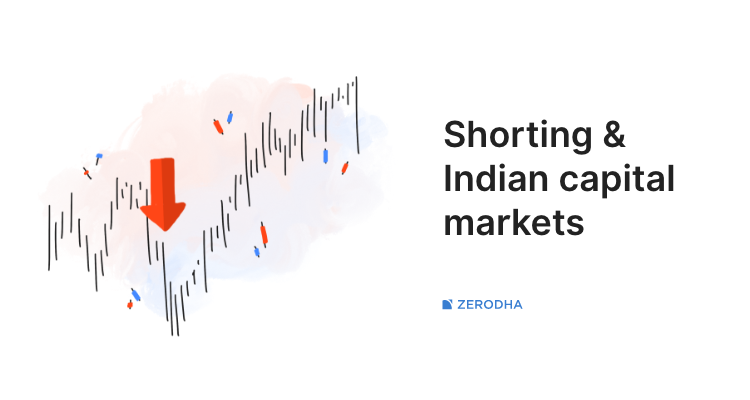 I guess you have read the headlines from the US on how retail traders are causing a “short squeeze” in stocks like GameStop, AMC entertainment, etc. If you haven’t, check this article by Finshots that explains this well. We have been getting a lot of questions around shorting, and if a short squeeze of this scale can happen in stocks listed on Indian exchanges. It cannot, and below, I explain why.

Many people who invest in the markets think that the only way to profit is buying stocks that have the potential to grow with an expectation that if the companies do well, the prices will also go up. This buying of stocks is also called going “long stocks”.

While most of us invest or go long stocks, there is a small community of active traders who do the opposite. They identify stocks that are not doing well and bet that the stock prices will go down. The trade is to first sell a stock at the current price (yes, sell a stock without owning it) and then buy it back at a lower price, when it falls, and pocket the difference. You sell a stock that you don’t own by borrowing the stock from someone and then selling it in the market. When the price goes down, you buy it back and then return the stock to the lender and profit. Of course, you can lose money if the stock price goes up instead of down as you would have to buy it back at a higher price. Someone will lend you the stock because the borrower will pay a fee for that and in the process, the lender earns an additional income from their stock holding. Of course, a lender will lend the stocks only if their intention is to hold it for the long term and not sell it within the period for which the stock is lent.

This mechanism of lending and borrowing stocks is called Stock Lending and Borrowing or SLB. Here is a link to a post that explains how SLB works in India. It was introduced in India in 2008 and activity on the SLB platform only started picking up in 2018 when the regulator permitted rollover of stocks lent upto 12 months (minimum 1+11 months).

On Indian exchanges, you can short stocks for intraday without borrowing from SLB platform. But such positions can’t be held overnight as you would be required to deliver the stocks for short positions held into the next trading day. While there are many short trades in stocks taken on an intraday basis, almost all overnight short positions are done using futures and options and not SLB, where traders bet on indices or stocks going down. Here are a few reasons:

But that said, there are a few benefits of trading on the SLB platform as well.

Because of these reasons, one might assume that there should be enough interest in the SLB platform to see activity. But there have been a few deterrents. Firstly, the lender’s income is qualified as “income from other sources”, so people lending will have to file using ITR3 and may need audits. Whenever there is a corporate action like rights and bonus issues, there is a forced closeout of the position. Finally, the product is complex in terms of back-end operations compared to F&O, and brokerage firms still don’t have systems to scale this. At Zerodha, we are working on offering the SLB platform to all our customers in the next few months.

Shorting on US stock exchanges

Unlike in India, where SLB is relatively new and not active, it is a huge market in the US. Many large short-only hedge funds identify and short companies that aren’t doing well without using F&O, simply shorting the stocks directly.

I had written this post a couple of years back, comparing Indian brokerage industry to the US. Here is an excerpt from that post that talks about differences in how security lending works in the US compared to India. How there is an incentive for brokers to lend securities, which has helped grow that market.

The structure of our depository system, like our payments system, is a newer and advanced system as compared to the US. This is mainly because India didn’t have a legacy when we went online in the 1990s. We have depositories like NSDL and CDSL where we hold demat accounts that remain unaffected even if a brokerage firm goes into trouble. In the US all securities are essentially held in book or street name with the respective brokers, what they call a “books and records system”. This means the securities are all held by brokers. This also allows the brokerage firm in the US to lend these securities to people looking to short stocks or borrow for various trading strategies and earn an additional source of income (Unlike India, borrowing stocks to short is extremely popular in the US). The earning potential for these stocks held by the broker is typically based on the number of people wanting to short the stock. For example, early this year, when Marijuana stocks were moving wildly, there were periods of time where one could earn as much as 100% or more annualized returns just by lending these stocks. Regulations in the US mandate the brokerages to share some of the lending fees with the person who owns the stock, but the entire thing is quite opaque to the customer. Most never get to know how much was earned.

In India, brokers can’t lend securities as they sit in the clients’ demat accounts with the depositories. Also, with the new set of regulations that came out on the 1st of Oct 2019, even securities bought by a customer that are unpaid for, cannot be pledged. Also, India does not have an SLB platform where clients can participate directly, and know the exact lending fees being earned.

Shorting stocks – India vs the US

A short squeeze or a stock going up forcing shorts to cover their positions by buying back stock which adds even more momentum on the way up can happen to any stock where shorting is allowed. But what we see in some of the stocks like Gamestop, AMC, are glaring loopholes left open by the US regulators.

In some of these stocks, the total quantity of stocks shorted (stocks borrowed and sold + using derivatives) is much more than the free float or the total number of shares held publicly. Allowing such large speculative positions is quite ridiculous and a recipe for disaster. While everyone is celebrating retail traders winning over a large hedge fund in this case, it rarely ever plays out this way. Most commonly, retail ends up losing money when there is excessive speculation.

In India, we have something called market-wide position limit (MWPL) where the maximum net position allowed in any stock is 20% of free float, both in F&O and in SLB. The maximum allowed per client is 5% of open interest or 1% of total free float. Such position limits ensure that the chances of anomalies that can cause crazy spikes up or down, like what we are currently seeing in some US stocks, reduces significantly.

But that said, a lower maximum position limit also comes with its own issues. There have been allegations in India that groups of traders move stocks to ban period (no new positions possible to be added) by buying deep OTM options at very low costs on certain low free float stocks. With no new positions allowed, any spike in the underlying stock price might exacerbate the move by forcing those stuck in a position to cover their shorts, causing a spike in the stock prices. The 5% OI on individual holdings makes this tougher to execute, and there are regulations to punish people who act in concert.

Should shorting a stock be allowed at all?

This is a philosophical question, and there are both for and against arguments to be made. I am for it because it enables better price discovery of a stock. There have been many occasions where short-sellers have identified potential frauds and ensured that such stock prices don’t go up. Additionally, those who hold short positions usually come to the rescue when there is a free fall in price, and there is no demand to buy a stock. A short position profit-booking by buying back the stock tends to add some support to the fall, reducing volatility. The flipside with shorting is that promoters of listed businesses have to also keep a much closer watch on the stock price. Apart from large short traders, it is possible to have competitors of a company trying to hurt the business by attempting to force the stock price down.

Have questions? Join the discussion on this Trading Q&A thread. Also, check this Twitter thread on why the capital market regulations in India are much better than those in the US.