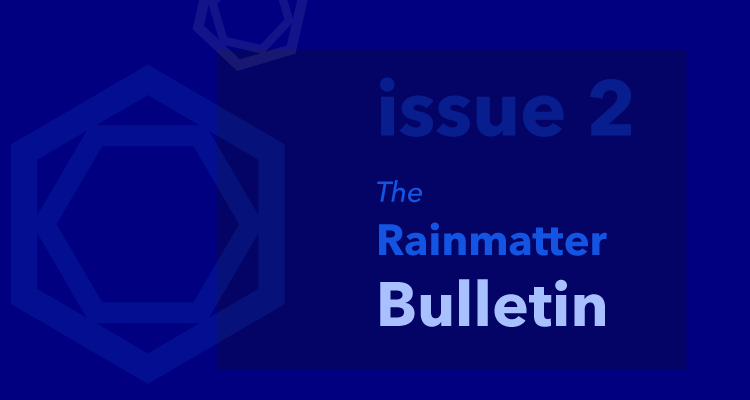 Fintech is hot🔥 right now. Everybody and their grandmother want to do some “fintech”. Q2, 2021 was the best quarter on record for fintech with $33.7 billion in funding – $1 out of every $5 VC dollars, according to CB Insights. But most of the money is still going into payments and lending. Deals in the wealth tech and capital market space actually fell. 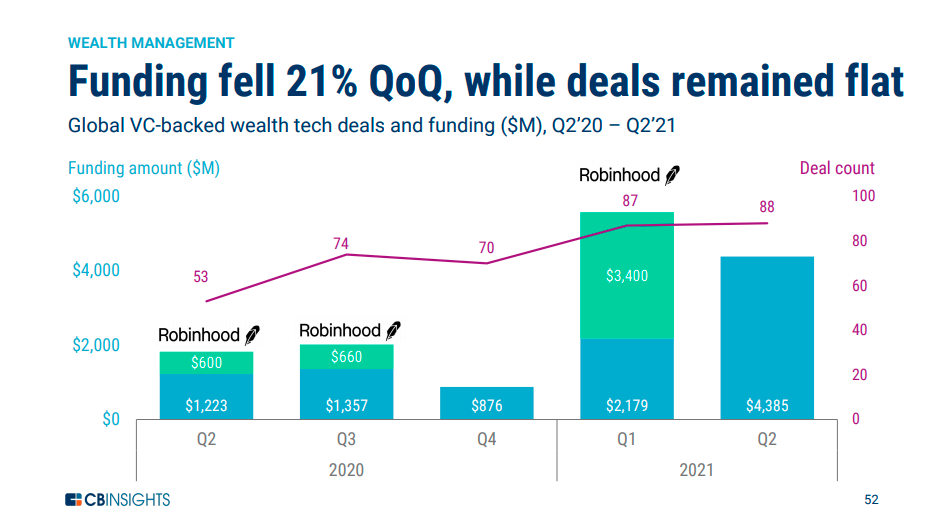 Do you want to get all the Bulletins in your inbox? Enter your email here.

In the FY 2019-20 budget speech, the Finance Minister had announced that a Social Stock Exchange (SSE) would be set up under the regulatory purview of SEBI. The intent was to enable social organizations to raise capital easily apart from the existing set of sustainability linked instruments like green bonds, social impact bonds etc. According to the SEBI working group report, there are over 3 million non-profit organizations. In a developing country like India, these organisations play a significant role in societal development. Often, they are the only presence in remote and underserved communities without any Govt infrastructure.

SSEs are not new. Globally, countries like Canada, Brazil, Singapore had set them up in various shapes and forms. According to this report by Samhita, these social stock exchanges have had varying degrees of success. Only 3 of the 7 SSEs are in existence today. This can partly be explained by the fact that these platforms have had a tough time financing their operations, as shown in the report.

What does this mean?

Last week there was a really interesting Clubhouse session on the same topic hosted by Sandeep Parekh of Finsec Law Advisors. Sandeep mentioned a few interesting points on why a social stock exchange make sense:

How will this work?

The interesting thing is that the SSE will be part of the existing stock exchanges and not a separate exchange. Globally, SSEs have been independent of traditional exchanges, which might be one of the possible reasons why they haven’t been successful.

In the proposed SSE, not for profit and for-profit social enterprises can use a range of structures and instruments such as equity, Zero Coupon Zero Principal bonds, Mutual Funds, Social Impact Funds, and Development Impact Bonds to raise funds.

This is still at a conceptual stage, and we are probably quite some time away before the Indian Social Stock Exchange is operational. But broadly, let’s say you as an investor want to make a difference; you can directly invest in any of these instruments on the exchanges.

The other possible angle to this is ESG. In the last 4-5 years, ESG investing has become a megatrend or a buzzword, depending on how you look at it. But greenwashing and dubious labelling has been rampant in this space. The other issue has also been that there hasn’t been enough supply of sustainability linked and green instruments for these funds to invest in. Though ESG in India is in its pre-nascency, if the Social Stock Exchange takes off, this will be a really good thing for ESG funds.

The robos are not alright

When the first modern robo-advisors started cropping up around 2008, there was a lot of hype. They were hyped as replacements for human advisors. The reality is that the robots ended up complimenting advisors as they co-opted the technology to automate the investment management function. Players like Jemstep and Betterment, among others, offer white-labelled robo platforms for advisors and banks.

A decade later, robo-advisors have neither been spectacular successes as they were made out to be nor have they been abject failures. The bigger ones like Betterment and Wealthfront hobbled along, making a series of pivots. There has been widespread consolidation in the space among the remaining players. While robos like Heggeable, Grove, SheCapital, and Robust Wealth shut down. Others like Personal Capital, FutureAdvisor, Jemstep, and Wise Banyan were acquired.

India hasn’t really seen a robo, the likes of Betterment. Though the label is generously used, most platforms are execution-only or with some advisory tacked on. But that’s an argument for another day. We have a detailed piece in the works.

The consolidation continued as JP Morgan closed its third fintech acquisition in the last 6 months. In December 2020, it acquired 55ip, tax-aware trading and rebalancing platform. In June, it acquired Nutmeg, the UK based robo and OpenInvest, the ESG focussed direct indexing platform.

Now, there are a lot of interesting things happening here, and it’s super fascinating. But before we get into the nitty-gritty, let me preface this with these excerpts from Jamie Dimon’s (CEO, JP Morgan) recent shareholder letter:

Banks already compete against a large and powerful shadow banking system. And they are facing extensive competition from Silicon Valley, both in the form of fintechs and Big Tech companies (Amazon, Apple, Facebook, Google and now Walmart), that is here to stay. As the importance of cloud, AI and digital platforms grows, this competition will become even more formidable. As a result, banks are playing an increasingly smaller role in the financial system.

Fintech companies here and around the world are making great strides in building both digital and physical banking products and services. From loans to payment systems to investing, they have done a great job in developing easy-to-use, intuitive, fast and smart products. We have spoken about this for years, but this competition now is everywhere. Fintech’s ability to merge social media, use data smartly and integrate with other platforms rapidly (often without the disadvantages of being an actual bank) will help these companies win significant market share.

We have mentioned that our highest and best use of capital is to expand our businesses, and we would prefer to make great acquisitions instead of buying back stock. We are somewhat constrained by how much we can grow our balance sheet because our capital charges will grow with our size, so sometimes buying back stock may still be the best option. But acquisitions are in our future, and fintech is an area where some of that cash could be put to work – this could include payments, asset management, data, and relevant products and services.

Most reports valued the deal at about £700 million ($977 million) but Sifted reported it to be around £560m and £600m ($782-838 million). The deal value would be around 16-17% of the AUM, which is super high, to say the least, not that JP Morgan can’t pay. That shows the kind of environment we are in where even loss-making fintechs with a very difficult path to profitability can still command such premium valuations. For some broad context, typically in India, most AMC acquisitions have been in the 5-10% of the AUM range.

Seems like a curious acquisition to us. But when you look at it from the lens of JP Morgan’s asset management and global banking ambitions, this kinda makes sense. Pretty much every major US asset manager has a robo. With the incredible fee compression, the US asset management has become a dog eat dog world. Unlike India, the US is an advisory driven market – both independent RIAs and large wirehouses like Morgan Stanley, UBS, Goldman Sachs etc. But with investment products becoming commoditized, there’s only so much you can do to stand out among advisors & distributors.

And with $3+ trillion shifting away from high cost traditional active strategies to low-cost index funds and ETFs, things are even more competitive. Today, with a few exceptions, pretty much all US advisors rely on index funds & ETFs as their core investment building blocks. Owning distribution was now more important than ever, and asset managers started looking at robos. And with the popularity of ETFs, which robo advisors exclusively use, it made sense for asset managers to own that B2C distribution.

And there are success stories here. Vanguard PAS, a hybrid robo that charges 0.30%, has $230+ billion in AUM. Schwab Intelligent Portfolios which has a free and a premium tier, has over $60 billion in AUM. Both platforms exclusively use their own funds. Now, JP Morgan was a bit late to the ETF game. But to make up for last ground, they launched a series of dirt-cheap index, smart beta and active fixed-income ETFs in the last couple of years. JP Morgan also had an existing relationship with Nutmeg to distribute their ETFs that they had entered in November 2020.

JP’s acquisition of OpenInvest is equally fascinating. In the interest of brevity, we’ll cover that in the next bulletin. There’s an interesting Indian angle there too.

On the Rainmatter Podcast

Nithin had an awesome freewheeling chat with Vasanth, Anugrah, and Rohan, the founders of Smallcase. This was super fun, especially the part about how the three of them avoid fighting😁

What we enjoyed reading last week

Nithin: The Algebra of Wealth, and When targets and metrics are bad for business

Som: Private equity and the raid on corporate Britain

Viraj: Bessemer Memos, Robinhood: Serious Fun, and Harder Than It Looks, Not As Fun as It Seems

Dinesh: Hedge Fund Evolution, Why Philosophy and Entrepreneurship? and After the Techcrunch bump: Life in the “Trough of Sorrow”

How was this issue of the Rainmatter Bulletin? We’d love to hear your thoughts. Please leave a comment if you have any feedback, suggestions or ideas for us; we’re listening.