Coin newsletter #4: Everybody is having fun 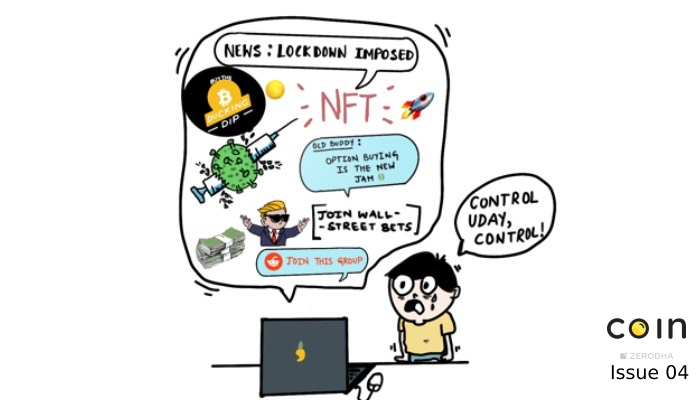 If you ignore the brutal bear market over the last one month, we’re still in a raging bull market. A lot of people think that the markets are in a bubble. I don’t know. I guess nobody knows. Talk of bubbles always reminds me of this tongue in cheek quote by Eddy Elfenbein:

A bubble is a bull market in which you don’t have a position.

We’ll find out if this was a bubble when this thing pops.

Like with all historical bull markets, there’s a lot of exuberance, but things feel really different to me this time around. Any talk of speculation naturally leads people to draw comparisons to other historical episodes like the Tulip Mania, South Sea Crash or the Great Depression crash. But these maybe not really be the right examples.

Contrary to the popular narratives, Tulip Mania was vastly overhyped and was limited to a few hundred people. The South Sea episode and the 1930s crash were also limited in terms of the number of individual investors. The Dot-com crash and the Japan episode are more analogous to today’s craziness—individual investors went nuts in those markets.

But if you thought things were crazy in the 1980s and the 2000s, the speculative excess in today’s market is in a league of its own—I’m talking globally, not just India. In a lot of the popular “manias”, excessive speculation was usually limited to certain sectors or parts of the market. What makes the current market different is the surface area of speculation is spread far and wide.

There’s irrational exuberance everywhere, from IPOs, stocks, bonds, venture capital, private equity to institutions. Then there’s crypto—an asset class that’s barely a decade old, is now worth $2-3 trillion. Much of this stunning growth has come in the last couple of years.

Perhaps nothing is more emblematic of the craziness than Dogecoin—a crypto token that was created quite literally as a joke has a market cap of $24 billion currently. That’s more than the market cap of companies like Eicher Motors and Sun Pharma. Virtual yachts and virtual real estate are selling for millions of dollars. Maybe I don’t get it. Cue the boomer joke.

Since the markets bottomed in March 2020, major Indian and US indices are up between 100-200%. During the same period, popular crypto assets are up anywhere between 650% to 20000%+. I can’t think of another period in the history of the financial markets when so much wealth was created in so little time.

When the pandemic hit and the world went into lockdown—suddenly, people were stuck at home and bored. To soften the economic shocks, governments and central banks around the world unleashed massive amounts of fiscal & monetary stimulus. Thanks to this stimulus, people had both time and money.

Some of this money found its way into the stock market, crypto and all sorts of other alternative assets. With most other forms of entertainment shut down, the financial markets suddenly became the go-to place for cheap thrills. The serious activity of Investing suddenly became a meme.

The other thing that’s different this time around is social media. We, humans, are social animals, and we’ve always been tribal—identifying with groups of people we agree with. Historically, these tribes were small because pigeons were the only social media. But with the internet and social media, the world became a smaller place. It was easier for people to find their tribes anywhere on the planet.

Though groups of people have been going crazy since time immemorial, we’ve never had large coordinated groups in the markets until the GameStop and AMC mania in the US last year. Traders banded together on Reddit groups like WallStreetBets and quite literally moved the prices of GameStop & AMC. The episode showed the dramatic impact social media could have on the markets and how it amplifies the delusions of crowds.

Finally, this age of speculation is the culmination of two huge forces that have been at work for decades: Financialization and democratization. Contrary to all the marketing spin these days, these forces aren’t always an unequivocal good. Certain products should only be meant for the “sophisticated and the rich” who can afford to lose money, and In a lot of cases, friction is good for lay investors.

If you just went back 10 years, apart from domestic stocks and plain vanilla bonds, it was almost impossible for individual investors to access other asset classes/subclasses. Things are radically different today. Small investors can invest in pretty much any asset class across all major markets.

To be fair, most of this craziness is limited to the US markets. Thanks to SEBI, the Indian markets look like a kindergarten compared to the US.

And what do you get finally?

Your friend who knows nothing about the markets tells you that option buying is the key to wealth creation. That 13-year-old kid brother of yours is making more than your salary by trading pictures of rocks and monkeys. Your uncle thinks applying for IPOs and selling them on listing days is the secret to outperforming Rakesh Jhunjhunwala. Your neighbour keeps sending you WhatsApp messages about how cheap deep value stocks under Rs 10 have outperformed useless quality stocks.

In such a frenzied environment, it’s tough not to be swayed by all this greed and what seems like easy money.

Just to be clear, I’m not saying all speculation is bad. Without speculation, there are no financial markets. For all the degenerate behaviour in the markets, there’s plenty of good behaviour too.

Mutual fund flows are at a record high, and we’re seeing a steady trickle of new investors. SIP inflows hit a record high of Rs 10,500 crores. Index fund flows went from a few hundred crores to a couple of thousand crores post-pandemic and they’re the most boring product ever. People are taking advantage of the extra time on their hands to get their personal finances in order. Traffic on Varsity has also gone up substantially—an indication that people are spending time learning.

But the thing about long term investing is that it’s boring, and there isn’t much excitement. It’s like that old Paul Samuelson quote:

Investing should be more like watching paint dry or watching grass grow. If you want excitement, take $800 and go to Las Vegas.

What makes things worse is that humans weren’t built for investing; we were built to survive. We were built to run the moment we heard a rustling in the bush. Early humans didn’t have the luxury of thinking long term.

Daniel Crosby, in his must-read book The Behavioral Investor, beautifully explains just how terribly suited we are to be investors. Here’s a lightly edited transcript snippet of him explaining this evolutionary mismatch on The AlphaMind podcast:

One of the main themes of the Behavioral Investor as you know is that the things that have served us well evolutionarily um don’t serve us well in capital markets. I mean your brain and your body were effectively made to live 30 maybe 40 years, to pass on your genes and then die. I mean, that’s kind of what we’re equipped to do.

Your brain and your body, make no mistake, are designed to avoid big disasters to pass on your genes and like that’s about it. We live in a world where our brain has not substantially changed in 150 000 years and yet capital markets, well-developed stock markets are 450 years old. So our brains and our bodies are made for an entirely different environment, entirely different milieu than the one that we currently find ourselves in.

We’re at a phase where an entire generation has seen 100%+ gains in a span of weeks trading random things. In this environment, I end up looking like an absolute idiot whenever I tell people to invest in mutual funds and expect 8-12%.

But like all things, this too shall pass. A lot of this excess will eventually wash away, and people will once again realize that there’s no “magic money tree.”

Given this backdrop, trying not to do silly things in such an environment is a bit like going to a party and trying to drink milkshakes. If you have a superhuman ability to stay sane and do nothing when everybody is going insane around you, then this post isn’t meant for you—you can close this tab.

But if you, like me, are constantly tempted to dumb things, then you need to take precautions.

I don’t care who says anything, there’s no harm in having some fun once in a while in the markets. I’ll edit this sentence when humans achieve total enlightenment. The trick is to ensure that this fun doesn’t hurt your long term goals. You need to quarantine your long-term portfolio from dumb and speculative things.

Unless you’re a monk, you need a release from that constant temptation to do silly things in your account. The more you resist not doing something, paradoxically, the more likely you are to do it.

The best way to do this is to have a separate account. A play money or dumb things account where you can go nuts and pick stocks, buy penny stocks, trade options or draw 27 lines on a chart and trade based on that. Not just stocks, buy pictures of rocks or monkeys or whatever floats your boat. You don’t even need a separate account per se. You can just use the tags on Console to tag these trades and track them separately, just like your long term goals.

Allocate a small amount of money that you can afford to lose. How much? I don’t know. Whatever amount doesn’t hurt your goals and doesn’t make you lose sleep. If you lose this money and can still look yourself in the mirror without feeling disgusted, that’s the right amount. Typically, about 5% of your portfolio.

Counterintuitively, the advantage is that by misbehaving in this account, you are behaving well in your long-term account. But there’s a risk too. Let’s say you pick a couple of stocks or trade options in this dumb things account, and they do well, there’s a risk of you feeling like a genius, redeeming all your mutual funds and going all in.

You must constantly remind yourself that there’s a difference between luck and skill. Even a monkey throwing darts at Economic Times will do well in a bull market. That doesn’t mean the monkey should become a fund manager.

On the Zerodha Educate podcast

I’d be very surprised if we experience another shock like this pandemic in our lifetimes. It has forced all of us to reevaluate every single aspect of our personal finances.

Retirement is the ultimate goal we all save and invest for, and the economic shock from the pandemic has seriously disrupted retirement planning for a lot of people. On the bright side, it has also served as a reminder for others to start thinking about retirement.

Given that we’re still not out of the woods, this is as good a time as any to think about your retirement. As that old saying goes, “Never let a good crisis go to waste.” Oh, and it’s not nearly as intimidating as it’s made out to be. So, we caught up with Ajit Menon of PGIM India Mutual Fund. PGIM publishes an annual retirement readiness survey which gives Ajit a unique vantage point to see how India saves for retirement. In this conversation, he speaks at length about interesting findings from the survey and also shares some really useful tips for people who are thinking about retirement today.

Hope you found this issue useful. We’d love to hear your thoughts, please do leave a comment below.