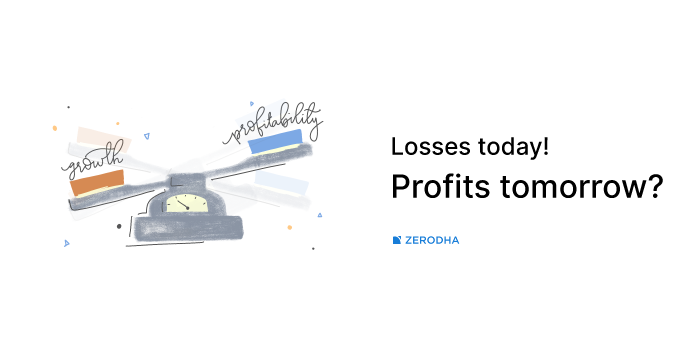 The world of investing has evolved significantly from when Benjamin Graham first wrote Intelligent Investor (1949), where he spoke about investing only in value stocks with sufficient margin of safety (intrinsic value > market value), to now where high growth startups are getting valued based mostly just on future growth potential. While we are currently in a bull market where it might seem earning returns from investing is easy, in reality, it has gotten much tougher over time. This is also the reason why index funds have been beating almost all active fund managers over the last decade. Investing just based on historical financial data or information that is available to all has mostly become redundant, especially more when evaluating new-age tech-first businesses.

With the experience of dealing in both private and public markets, I thought I would share some points to consider when considering investing in high-growth companies which may not have the track record in terms of revenue or profitability. I believe it is pertinent now considering the rush of such companies listing on Indian exchanges.

The first and the most important thing to remember is that the new breed of tech companies carry a significantly larger risk since they are valued with an expectation that they will be large profitables businesses in the future, but not now! While we all look at a company like Amazon which wasn’t profitable for a very long time, but still created humongous wealth for shareholders and hope that we get to become rich by finding the next Amazon, the truth is that for every one Amazon, there are thousands of such companies that never made it. The odds of being able to pick that one winning company that will go from no profits to a lot of profits and survive, is quite low. So, the most important thing to do is to factor in this risk by allocating only a portion of your portfolio to such high growth and high risk stocks. The more conservative you are in terms of risk, the higher the odds that you will stay invested even if there are large drawdowns, of which there will be a lot in most companies, even if you get lucky in finding an Amazon. With Amazon, the stock had a drawdown of 90% in 2000 to ~$10 and 50% in 2008 to ~$40. The stock price is now $3500. 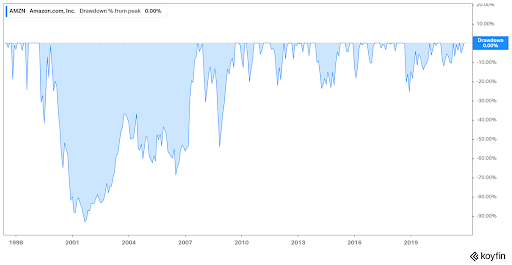 Drawdowns for $AMZN over the years

Here are some of the questions to ask when evaluating some of the new-age high growth and low-profit businesses on the Indian exchanges. Many of these questions also apply to traditional businesses as well, but more so for companies who are mostly valued based on future growth.

I guess if you are looking at investing in Indian companies, you believe that we will continue growing as a country. Currently, India’s per capita GDP is ~$2000 and as it makes its way up to $4000, the opportunity for businesses who are tech-first to capture the incremental growth thanks to the penetration of the internet and smartphones will be significantly more than traditional businesses. But can that journey from $2k to $4k take much longer than what we are currently expecting it to take? Of course it could potentially, and that could negatively impact all companies, but significantly more in the case of those who are relying on the potential future growth and don’t have sufficient runways due to low revenue and profitability today.

Can the target market expand?

As India grows, there will be some industries and sectors that will do better than others. For example, it is a fair assumption to make that Indians will buy more products digitally than they are doing today. The question to ask though is, how much larger can that target market that the business is catering to get. This is the wildcard. For any business that is in a category that is expanding fast means tailwinds in that segment will automatically help them significantly. If you look at private market investors (VCs and PEs), their primary bets are on sectors and industries that have the potential to expand manifold.

I have been wrong about estimating this myself in an industry where I have spent over 20 years. I was unable to foresee that the capital markets could expand as fast as they did in the last 18 months, something that would have otherwise probably taken at least 5 years. Zerodha has been a significant beneficiary of this, growing from 2 million customers to ~7.5 million in those 18 months. The first 2 million took us 10 years.

Say Zerodha was a listed business, and we rewind back to Dec 2019, and you were trying to evaluate investing in Zerodha based on the market size and our financial track record, not factoring in the rapid, unpredictable market expansion that happened in 2020. You may not have invested at all thinking that we are an expensive stock, a business that is working in a very shallow market that is not expanding fast enough. That said, I am still pessimistic about this and think that the last 18 months was an aberration and that it is impossible for the expansion to sustain at the current pace. But if you look at all the money flowing into the Indian startup ecosystem at absurd valuations over the last year, the entire VC/PE industry seems to be taking a bet that something fundamentally has changed in India post COVID, and that the market expansion in many sectors will continue for a long time to come. Of course, India has also lucked out thanks to certain market events in China in the last 12 months, causing foreign funds to seek other markets like India. My personal pessimism about the near future may be proven wrong yet again though 🙂

Is the business a leader in its space?

The reason we benefited as much when markets expanded is because we were already a leader in the broking industry. A large existing user base thanks to better products and services compared to the competition. The odds of succeeding are high when investing in stocks that are trending. That is, a market leader remaining a market leader is easier to call vs. identifying an underdog that can become a market leader. Hence, being a market leader or being among the top two in an industry gives a business a significant valuation premium, which increases its ability to raise more capital, which in turn increases its odds of succeeding and remaining the leader. While we have a tendency to focus on a few companies that raise a lot of capital, if you look across sectors and industries, bulk of the capital is really only available to the market leaders. As we speak, in the middle of the greatest bull market for the Indian startup ecosystem, there are thousands of companies who aren’t able to raise any capital at all. Of course, when the expansion story of a sector intensifies in the private space and when it is tough for a VC or PE to get on the cap table of a market leader, they do end up investing in new startups, but raising future capital for such businesses can be quite tough unless they quickly close in on the market leaders.

The “user growth” of the business.

This has emerged to be the most important metric, not just to determine if the business is a leader in its space, but also to gauge market expansion. This unfortunately is also a number that can be easily gamed by a business, especially in a market like India where:
– the per capita GDP is just $2k.
– there is a mobile+internet penetration of almost 500 million people.
– a significant percentage of the population earn less than $2k of annualized income.

Given this state, there is a large percentage of internet users who may be influenced to sign up for a business or a service in return for economic rewards of a few hundred rupees worth of freebies, allowing an easy path to artificially inflating the “user” base of a business. That is, if you give enough economic incentives in the form of freebies or cashbacks, it is possible to have a huge number of people signing up to your website or app and performing actions on it, who can then be counted as “users” to show growth.

Hypothetically, if Zerodha was to give Rs 500 to a customer to refer a person and Rs 500 to the referred person for opening an account and perform certain actions on our app (like placing a dummy transaction), it would result in the rapid, enormous growth of our user base, although the bulk of the “users” would just be artificially created accounts that do not generate any real business. Every Rs 100 crore spent on 1 million customers could be a potential valuation bump in the 1000s of crores.

Such “users” help the narrative of showing “growth”, but generally not in building or sustaining a profitable business. If anything, users who don’t add any value to the business only slow the business down, especially in a risky and regulatorily complex environment like finance. So, as an investor considering investing in a high growth business, I guess the most important thing is to be able to determine if the user growth of a certain business is real or not, separating the wheat from the chaff.

I just came across this tweet from Bhavin, and I couldn’t agree more. It is very likely that SEBI would be concerned about retail investors being misled into investing in companies just based on future growth narratives based on artificially inflated current user growth. With the successful listing of large startups, it is only a matter of time before smaller companies without strong corporate governance start weaving misleading narratives and benchmarking themselves to the larger peers demanding higher valuations. I would argue that mandating sharing granular data on the user base and putting an audit framework around it is as important as mandating audited financials to protect investors interest in today’s world.

A question I have always wondered about the private market space is why some of the sharpest minds from the VC and PE industry who have access to all the data and do sufficient due diligence, invest in companies that clearly game the user growth numbers. Is it FOMO (fear of missing out), or a belief that eventually those numbers will somehow turn real, or is it just the Greater Fool theory in action—a bet that they’ll find a buyer willing to pay more money for the share in the future ..

Finally, I want to reiterate that the only way to improve the odds of succeeding in the markets, in the long run, is by limiting risk. Many of the companies that try to constantly show growth and sustain themselves solely based on their ability to constantly raise funds until they get to large profits are likely to perish as the liquidity tap which is funding them can dry up at any point. That said, a minority of those will also probably top the list of stocks with the highest percentage returns on the markets in the future. But, the odds of being able to pick those rare winners is stacked against the investor. Hence, the sensible investment strategy is to allocate only a small portion of your portfolio to high growth and high-risk stocks, and within that pool, diversify by investing in as many companies as possible that tick all the boxes that I mentioned earlier.

Have questions? Post them on this Trading Q&A thread and be a part of the conversation.

What do you think?

Continue the discussion at tradingqna.com