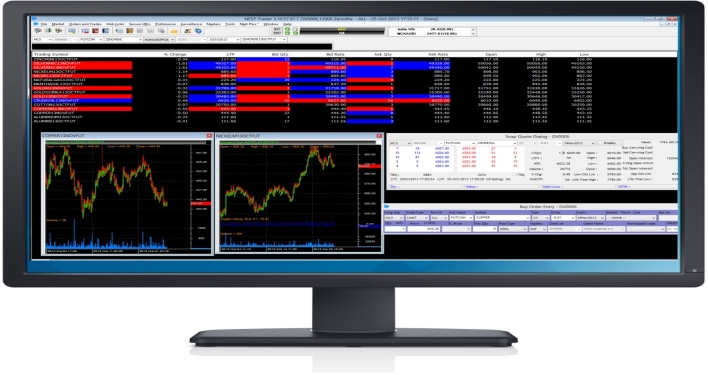 Beginners, don’t worry if you don’t understand when you read this manual. We will explain how to code your technical analysis strategy in the “Code your strategy” section.

A trading system is basically a set of rules that determine entry and exit points for any given stock. Traders often refer to these points as trade signals.

A trading system is objective and mechanical. The purpose is to provide a strategy to produce profits greater than losses by controlling your trades for you.

Trading Systems may have any number of rules, such as don’t buy unless volume is trending upwards, or exit if Parabolic SAR crosses the close, etc.

The actual profitability of a Trading System depends on how well the Trading System’s rules perform on a trade-by-trade basis. Traders spend much of their time optimizing their trading systems in order to increase profits and reduce risks.

In the case of a basic Moving Average Crossover system, this is accomplished by modifying the parameters of the moving averages themselves.

A trader may optimize a Trading System by means of backtesting. The backtesting feature of NEST Pulse allows you to backtest your trading systems and modify parameters to achieve the maximum amount of profit and minimum amount of risk.

# The close crosses above the Parabolic SAR

# The close crosses below the Parabolic SAR

# A combination of Simple moving average,MACD and stochastic.

# A combination of Simple moving average,MACD and stochastic

An upward price gap occurs when a stock opens substantially higher than the previous dayâ€™s high price. This often occurs after an unexpected announcement, much better than expected earnings report, and so forth.

A large number of buy orders are executed when the market opens. During this time the price may be exaggerated as investors may be buying the stock simply because it shows strength at the opening.

The price often retreats to fill the gap once orders stop coming in and the demand for the stock subsides. The key to this trading system is that reversals usually occur during the first hour of trading. In other words, if the gap is not filled during the first hour then we may assume that buying will continue.

This trading system is often more successful if volume is around twice the fiveday average of volume.

Example: The script returns securities that have gapped up by 2% and closed near the high. When the market opens on the following day, the strategy would be to buy stock after the first hour of trading if the strength sustained.

A stop-loss order would be set at the day’s low. A conservative profit objective would normally be half the percentage of the gap, or 1% in this case.

Use a profit objective roughly ½ the size of the gap with a stop-loss.

Use a profit objective roughly ½ the size of the gap with a stop-loss.

Bollinger bands are similar to moving averages except they are shifted above and below the price by a certain number of standard deviations to form an envelope around the price.

Unlike a Moving Average or a Moving Average Envelope, Bollinger bands are calculated in such a way that allows them to widen and contract based on market volatility. Prices usually stay contained within the bands. One strategy is to buy or sell after the price touches and then retreats from one of the bands. A move that originates at one band usually tends to move all the way to the other band. Another strategy is to buy or sell if the price goes outside the bands. If this occurs, the market is likely to continue in that direction for some length of time. The Bollinger band trading system outlined in this example uses a combination of both trading strategies. The system buys if a recent bar touched the bottom band and the current bar is within the bands, and also buys if the current high has exceeded the top band by a certain percentage. The system sells based on the opposite form of this strategy.

This trading system buys or sells on increasing volume and lessening volatility.

The concept is that trends are more stable if volatility has been decreasing and volume has been increasing over many days.

Volume is an important component to this trading system since almost every important turning point in a stock is accompanied by an increase in volume.

The key element in this trading system is the length of the primary price trend.

The longer the price trend is, the more reliable the signal.

Also try experimenting with this trading system by substituting the TREND function for volume with the Volume Oscillator function, or the Volume Rate of Change function.

This example shows how to use Boolean logic to find securities that match the condition either for the current trading session or the previous trading day.

# Buy if the Mas crossed today or yesterday and

# if the PSAR crossed today or yesterday

# Sell if the Mas crossed today or yesterday and

# if the PSAR crossed today or yesterday

In this trading system we use an exponential moving average and the TREND function to identify market inertia, and we use the Moving Average Convergence / Divergence (MACD) indicator to detect market momentum.

As you may know, the MACD indicator reflects the change of power between traders who are on the long side and traders who are on the short side. When the trend of the MACD indicator goes up, it indicates that the market is predominated by bulls, and when it falls, it indicates that bears have more influence. This is known as market momentum. This system buys when both inertia (a TREND of the EMA) and momentum (the MACD) are both in favor of rising prices. The system sells when the reverse is true. Exit signals are generated whenever either signal turns to the opposite direction.

# Buy if both momentum and inertia are favourable

# Sell if both momentum and inertia are favorable

# Exit if either momentum or inertia become unfavorable

Stocks that remain bound by narrow trading ranges often tend to continue in the direction of their breakout. That is to say, if a stock remains in a narrow range between $40 and $45 for an extended period then breaks above $50, it is likely to continue rising for the foreseeable future. The premise being that the longer a stock remains in a tight range, the more difficult it is becomes to breakout of the trading range. Therefore when the breakout occurs, the uptrend should continue.

Outside days that occur after a strong uptrend  indicate market indecision, and may signal a reversal or temporary correction in price.

# Outside days are more significant if the

# previous bar is shorter in height

# The trend should be up

# The trend should be down for a sell signal

This blog is an extended series of the User Manual for algoZ.  You can find the Glossary of Indicators available on algoZ here.